Climbed out of Meyersdale and back to trail where it continued the railroad grade of 1-1.5% grade upward. Had to keep reminding Jeanne we were climbing as it certainly seemed flat. Reached the top and a underpass stating eastern continental divide separating Potomac and Mississippi rivers. Atlantic and Gulf of Mexico. 2392 feet (792meters) 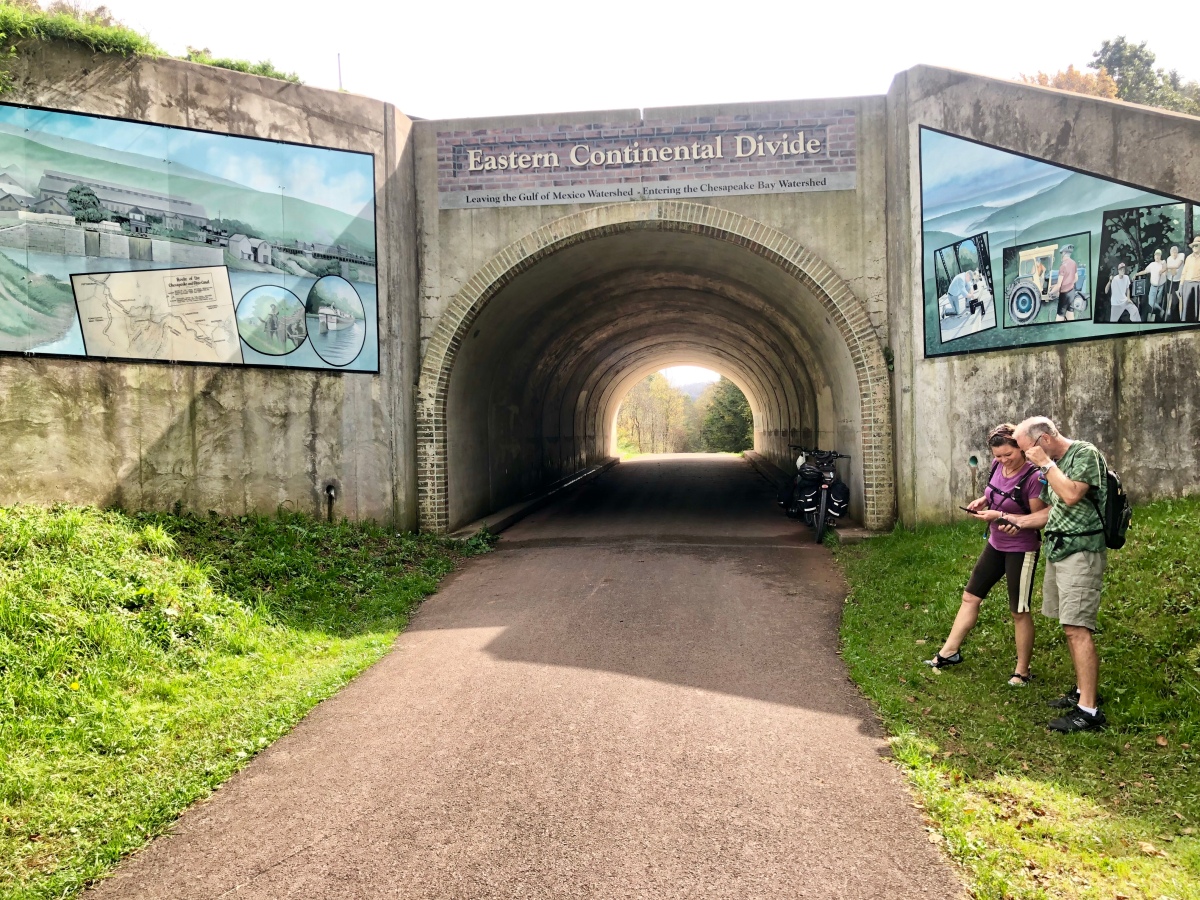 Began the downward. Descent barely peddling for 20 miles (30 k) stopping for good beers and bad food at the college town of Frostburg. Great views out over the rolling hills extending seemingly forever. Crossed the Mason-Dixon Line and we were in southern United States, although description stated it was more a property settlement in the 1700,s than a slavery location line. 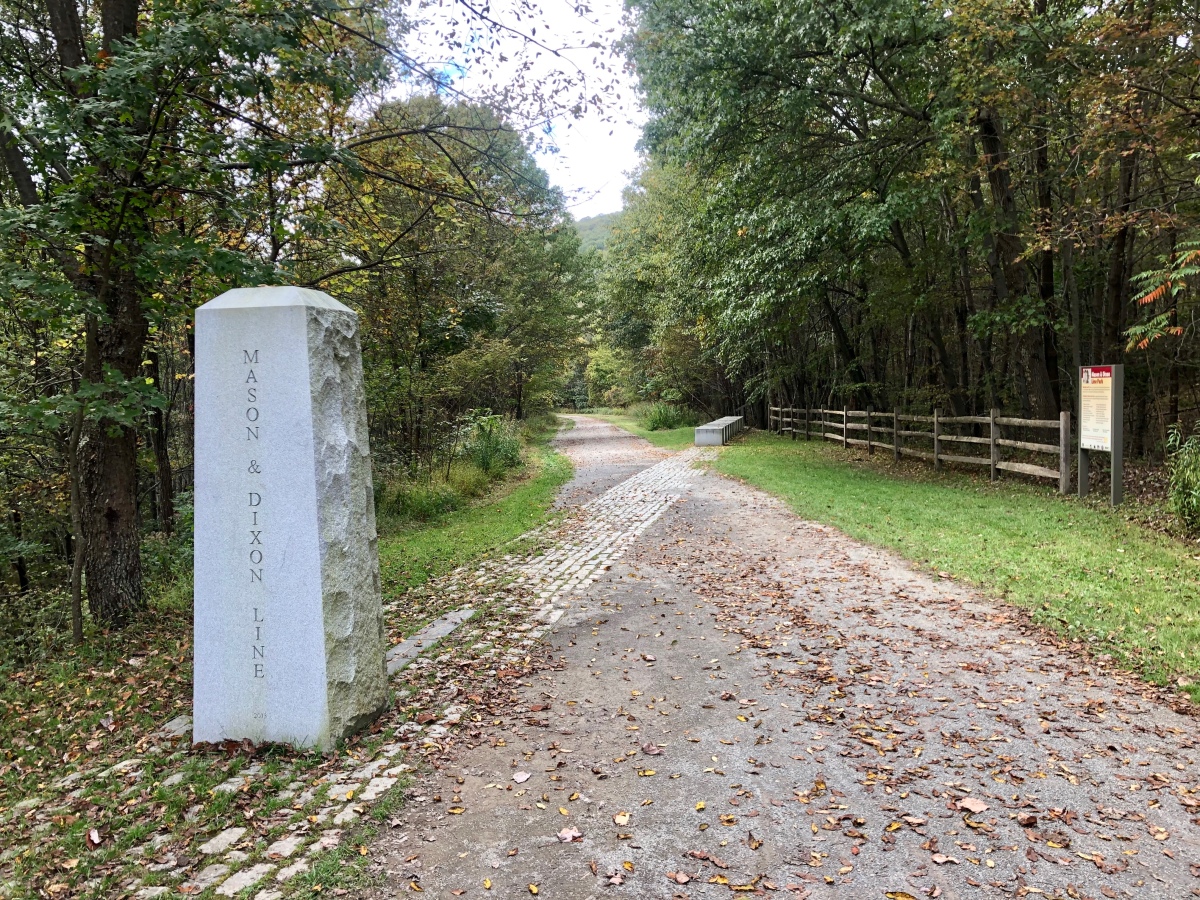 Then along the tracks of scenic railway Western Maryland into Cumberland Maryland, the largest town since Pittsburgh at about 30,000 people. A delightful meal with new friends and the GAP trail was done,onto the C & O towpath. (Great Allegheny passage and the Chesapeake & Ohio)

We had been hearing stories of the mud and disrepair on the C & O. It is a national historic trail maintained by the National Park service which is drastically underfunded. The GAP is run primarily by volunteers. I stopped at park headquarters for update and reassured that only two major sections were out – deep mud for 2 miles (1.6 k) at mile 88 and a bridge out at mile 55, both a few days away. But warned to ride through puddles as edges tended to be slippery and people fell in. The past months have been very rainy year here.

One section is tunnel cut for the canal. Interesting riding as dark and sides are a bit curved so orientation is a bit off. 3018 feet (.91 kilometer) long paw paw tunnel. 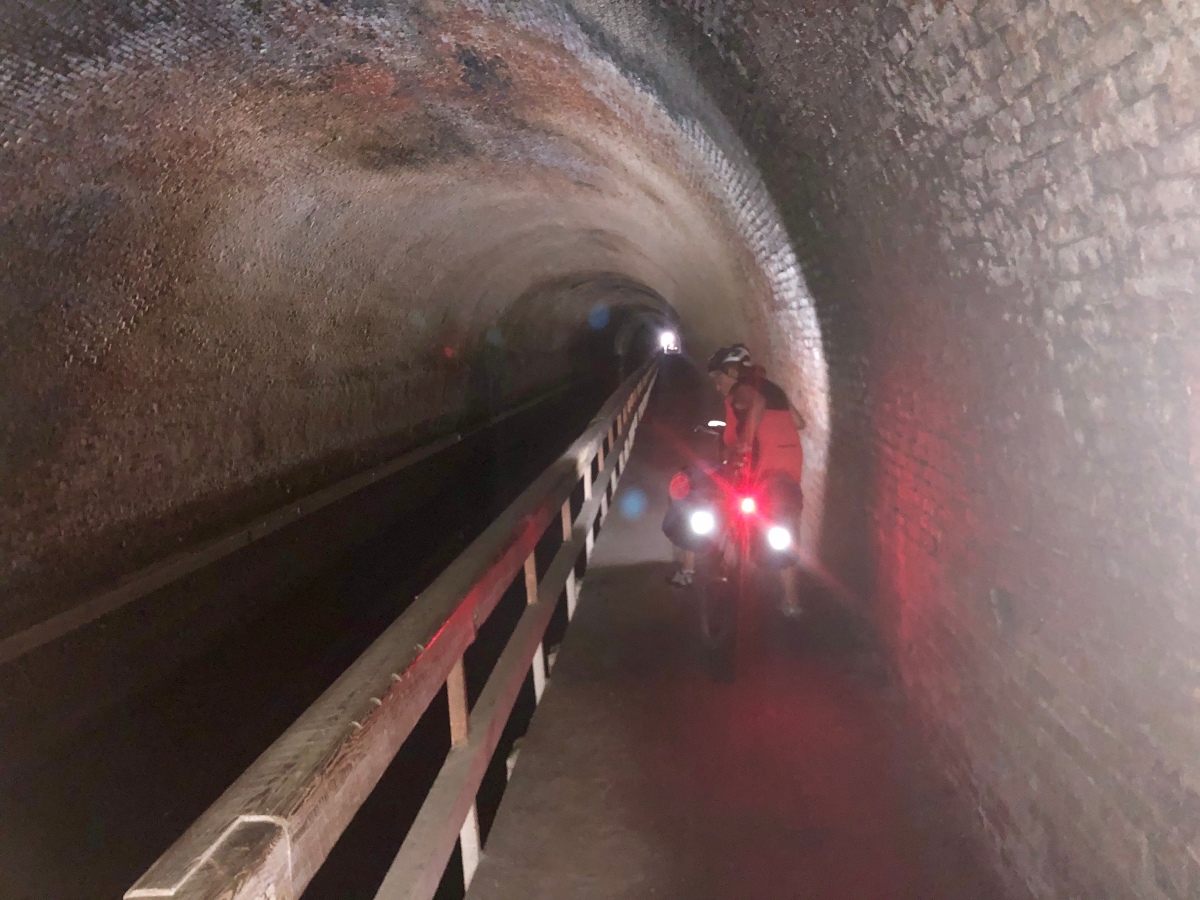 On to Little Orleans where directions were ride to mile 140 cross bridge to 15 mile creek, go under tunnel then eat at bills before calling for a ride to B & B. We arrived 15 mile creek but not mile 140. Luckily the app map showed instead of crossing 15 mile creek just turned left, went under tunnel and ate at bills. Apparently 6 miles to B&B and shuttle encouraged as “very steep hill and only 3 out of 800 bikers made it last year” I chose to ride and it was a wonderful ride although 9 miles added to the 42 of day. Through the forest hills then out into farmland and again a climb but not bad. I did sweat profusely as although temperature only about 75 (25c)humidity near 90%. A delightful B &B where 60% of occupancy is by bikers.

Great times and adventures. One never knows what you will find unless you try.

2 thoughts on “Over the top and beyond”