“In the spring, at the end of the day, you should smell like dirt.”

In 1965 I did my first bicycle tour, taking the train from Utah alone to Philadelphia. I joined a group of 16 year olds led by a 22 year old and we cycled for a month ending up somewhere on the C & O towpath into Washington DC. It was a grand adventure, one I am not sure parents would let their kids do that today. My parents have said it started my wanderlust.

Since that time I have added a few more tours in numerous locations, but currently am back where it started, although my memory is a bit fuzzy as to what I saw years ago. Memories have a way of emerging though, and I remember riding my road bike, which was really the only kind available back then. Currently one needs wider tires closer to a cross bike or a mountain bike although suspension is not necessary. One can still cruise, but the trail thus far has been a bit of mud, puddles, roots.

Departed the B &B up on ridge near 1500 feet (450 meters) in elevation dropping to 300 feet (100 m). Temp was about 70 (21 c) but humidity was 100% and had rain overnight. It was questionable whether raining for the ride or just humidity falling. Started with rain jacket but shed it quickly due to sweat and getting soaked anyway.

I was the only one to ride down of 14 staying there. All but Jeanne and I decided to pay a shuttle to skip the gravel, puddly few miles to where a paved trail beside towpath was built. I met Jeanne back at Billy’s bar where a conversation began about our current president. Jeanne and I departed quickly.

Great riding and we cruised along trail similar to beginning of the trail back out of Cumberland. Maintenance is a bit lacking. Hit the pavement and began really cruising, Jeanne excited as she could look around and not be totally focused, looking down at potential pitfalls.

Reached Hancock and wanted to explore a bit, but now it was really starting to rain and decided to get to Williamsport quickly and maybe diminish the time spent in rain. Jeanne has her rain gear on, but I was just in regular bike gear soaked, but not cold. 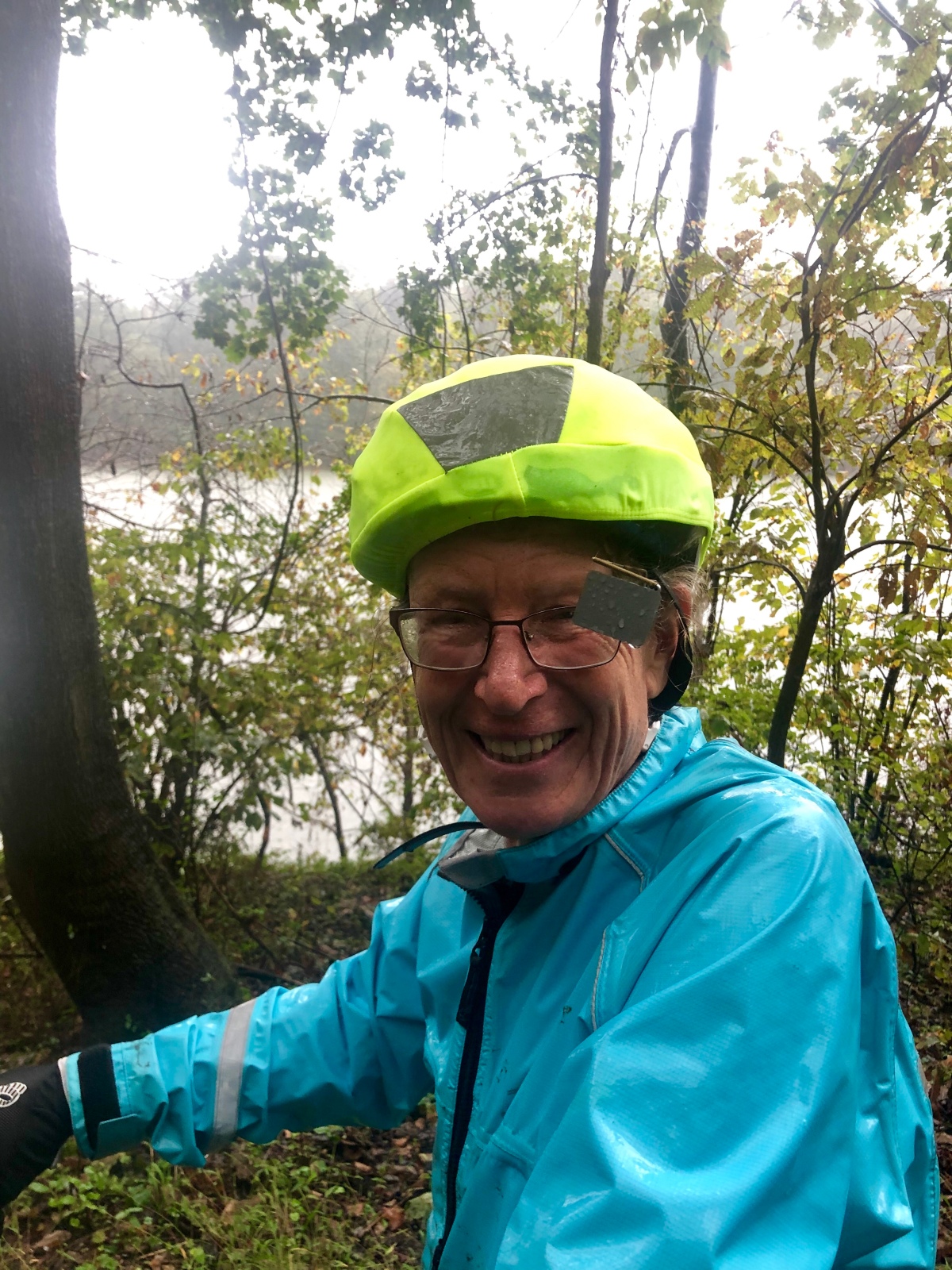 It began to rain hard finally slowing down about the time we reached Williamsport. Motel was a mile out of town, and we asked for a hose or something to clean bikes with. They said they had none. (Most places we have found have a cleaning station for bikes) we asked for an old sheet or pad to set bikes on in room, but were told nothing available and just take them in room. A long term resident said motel often completely filled with bikers and all told the same. He said often people put their bikes in the shower. We cleaned our bikes, which were covered in mud, the best we could outside and rolled them in, feeling bad for trashing the room, but we were told to do that.

Next day partly cloudy but a reported mud section with 2 miles (3k) of unrideable 9″ (20 cm) gunk. Funny the stories one gets, varying from nasty but ok to totally undoable. One has to check it oneself. I had checked with park service before in cumberland and a detour was available. In talking with folks I began to realize the trail detour was well marked north to south but not so much going south to north. We are riding the former, and that is what we found although as we progressed on the 6 mile (10k) detour the detour signs became less and I began using the gps more and more. When we reached the towpath again there was no “towpath closed” sign going north,as there had been going south. No wonder the folks riding north were bewildered and miserable. But it was a delightful ride, for us away from the forest of the river, canal and towpath, seeing the farm country. 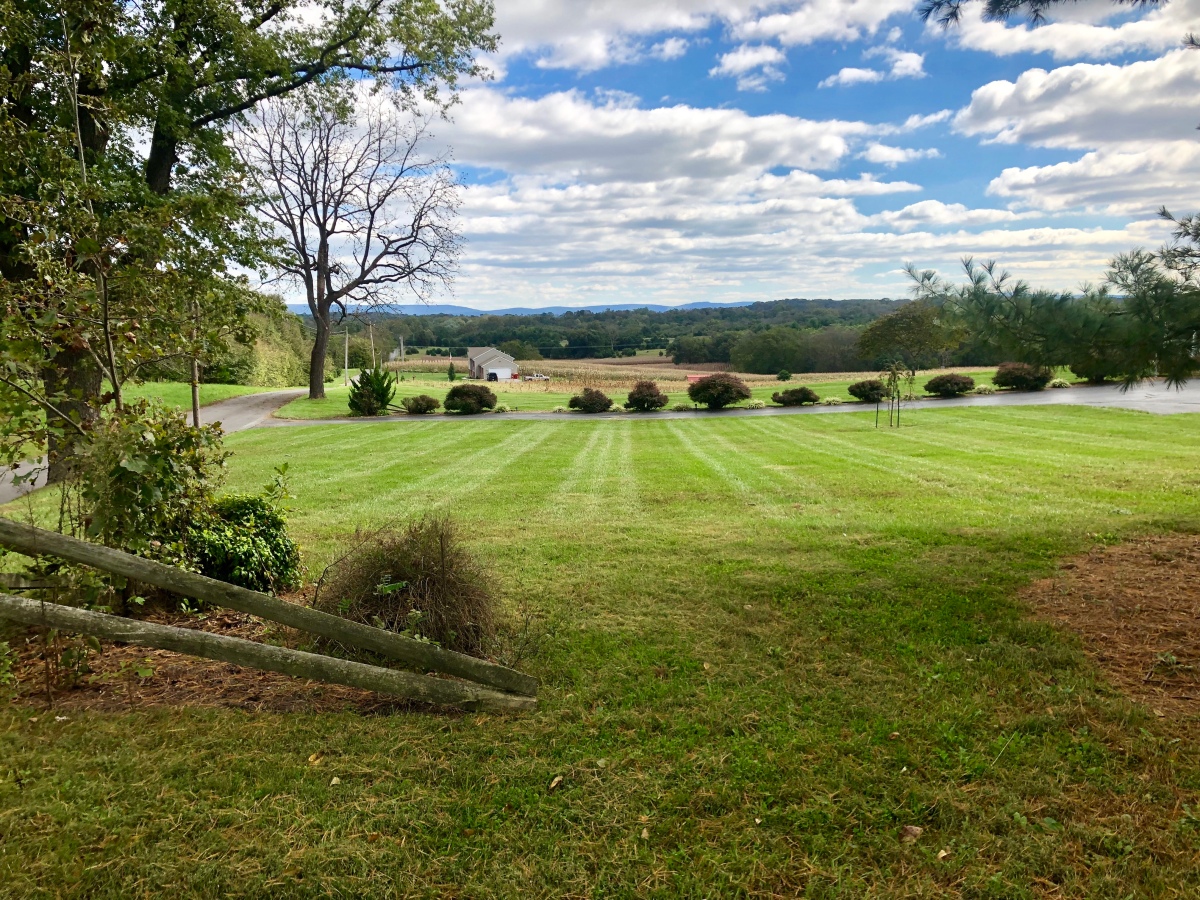 Delightful ride with more history along the way. Passed by Antietam creek where 4 miles upstream was the bloodiest day in civil war history. 23000 lives were lost in a single day. Humanity???? We humans are a crazy lot.

Arrived across the Potomac River from harpers ferry, one of the places we visited in 1965. I only remember visiting it and seeing lots of civil war history and the Appalachian trail crosses here. We climbed the circular staircase with our bikes onto railroad bridge with pedestrian trail on side. (Road bridge is downriver a few miles), arriving in West Virginia, the mountain state and began climbing the street to motel. Quite a climb then a descent back to river, where motel is. Not a bike friendly or pedestrian friendly town, in terms of physical layout, but motel had a bike wash, and rags to clean bikes. In for a rest day.

Interesting in that this canal never really made it to commercial viability. It began in competition with the railroad and the railroad won. All about the same time as Erie Canal which was very much commercially viable.

history can be fascinating

time for a rest day.