Signed up for this trek as inca trail sold out six months in advance. (Reservation permit system due to numbers). This one billed as just as nice but without the hoards of people.

It was very nice 4 couples including Jeanne and I. Others Erin and Dave from Washington D. C., Dorothea and Josh from New York City, and Marta and Gisseppe from Rome but currently living in New York, getting ready to transfer to London. All fun people much younger than us but that does not take much. Turns out Marta and Gisseppe have never been hiking or camping. This was first experience. Well Llama path was great providing food, tents, warm water bowl for washing at tent on awakening. Five porters, cook, and guide. Five donkeys to carry all but our day packs. Food was amazing, not just hot but three meals inside wall tent chairs table. Start with soup usually a quinoa something and awesome then elegantly prepared main course of a variety if things. And always hot tea and clean water for the trail ;do not drink Peruvian water. And the guide Reuben. Great at helping us and telling history. ( a huge story in itself). He is one of 10% of Peruvians who follow the Andean religion. 80% are Catholic, 30% practicing, and 10% other often seventh day Adventist. But the religion has always been interesting to me. But weird. Do not get me started.

Well, turns out one of the harder hikes I have ever done. (Remember Marta and Gisseppe). Started out with bus ride of about 2 1/2 hours starting at 5 am. Great breakfast of juice pancakes coca tea rolls and other stuff I forget. Then 8 miles up starting at about 11000 feet riding to our camp at 14,100. Everyone but Jeanne and I had only two days acclimatization. Lunch it began to pour rain then hail temp about 7-8 C. Then back on trail rain stopped but a bit of drizzle. By the time we reached camp we all were pooped. But happy hour if popcorn and tea brought to tents where everyone but me was laid out. Gisseppe having difficulty with altitude the worst; severe headache , and any movement severe nausea. A bit concerning. Dinner and we collapsed. On one of my 4 trips to bathroom stars came out and saw old friend constellation if Orion, but knew no others and it was freezing. I think Jeanne and I were only ones who slept.

In morning Gisseppe was seriously thinking of going down due to feeling horrible but managed to get breakfast and felt a but better. Onward and upward. Through about 2″ of snow rising eventually to 15850 feet at pass mountains above us. That was 2 miles then down 10 miles to about 10000 feet

I thought of brother in law, Steve Penner who says “any day in the snow adds two weeks to your life”. Well I have added 4 weeks to my nursing home life.

Hiking up I ended up in front. It worked out every was there at some point not that it was a big deal. I was in front huff puffing my way up thinking I am slowing everyone down with my incredibly slow pace. Breath step breath Repeat. I looked back and others I thought I was slowing down were a hundred meters back. Finally the top and then the descent. Always fun descending from high altitude. Breathing gets easier the plants reappeared beautiful alpine lakes and gnarly steps. This trail has been used for well over a thousand years. Lunch finally about 2 at a village with llama grazing about. People beginning to plant potatoes. One potato at a time.

The about a four mike part road part trail to the lares hit springs. Arriving after dark exhausted. Reuben herding his charges with great finesse. Keeping us going. My nose is running like crazy having felt a cold coming on for several days. The hot springs were awesome with large pools of a variety of temperatures. We camped right next to them. We all were pooped.

But a note on the local kids. Obviously they have very little. I realize everyone in the United States is rich. I did not remotely say happier. But life at altitude is tough even if you are adapted to it. And now tourism is a part with Trekkers hiking through there pastures, fields,and villages. So when kids see tourists they come out to watch not necessarily expecting anything but it has become a custom. Reuben advised against candy, the usual gift, but instead notebooks and or paper and pencils. When given they thanked us profusely but again were not demanding. And ever so cute in their sandals and wide eyes. Sandals are the shoe of choice whether economic or they just like. But bare feet in the snow. Heard ing donkeys , llama, sheep, or planting crops. A delightful place.

I would include pictures but alas afraid internet is very marginal here at aguas calientes.
But more in next blog. Had to break this up. 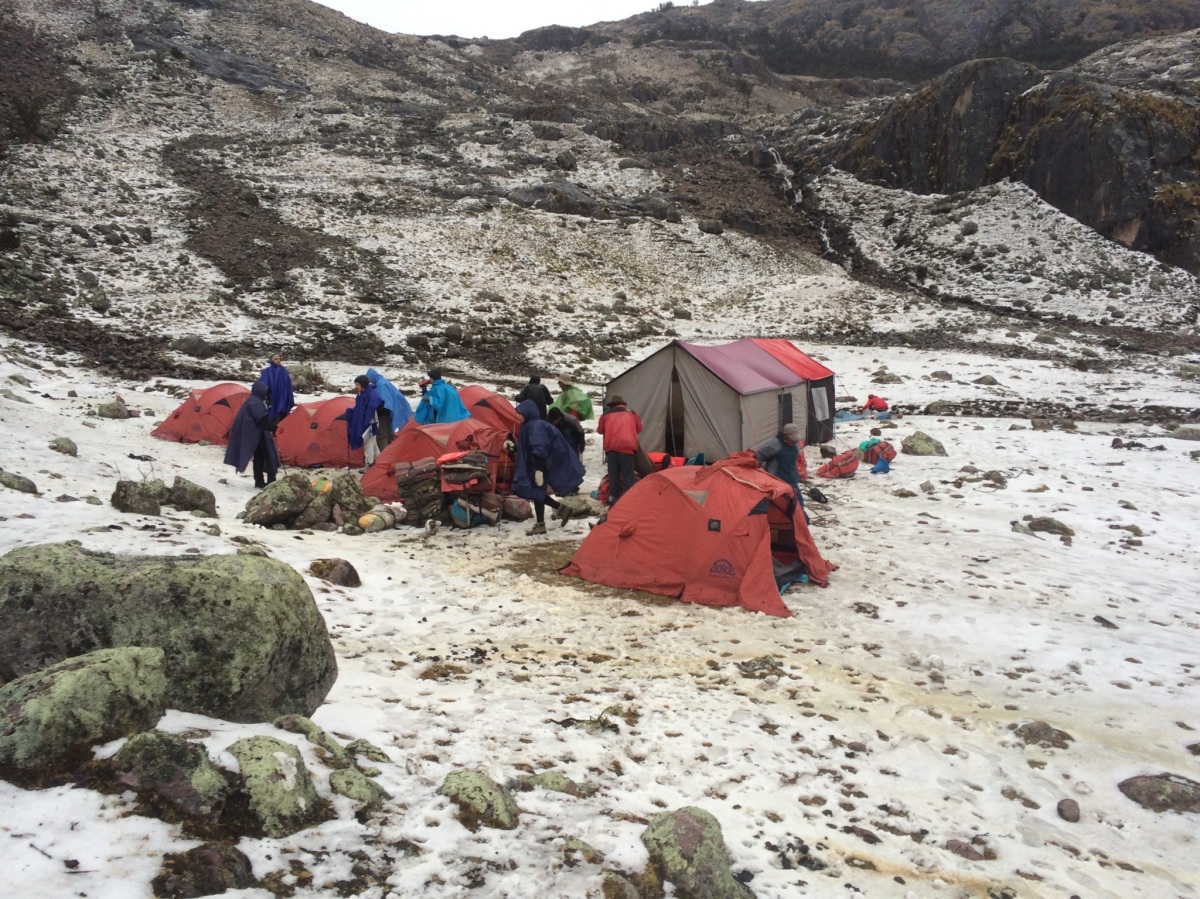