Has been an interesting week.  The one thing we really wanted to do was go to Iguazu falls, a world heritage sight and one of the wonders of the natural world.  We had been having trouble piecemealing a trip together and decided to get to a travel agent in buenos aires.

On arrival caught a taxi to the airbnb we had rented, nearly leaving my computer on cart at airport.  Uh oh,  traveling always is risky. Had to wait a bit as they needed to clean  the apartment after the last tenants.  Went to local parilla restaurant (barbecue) and did the usual ordering with a nice sounding name which I had no idea what it was.  I ended up with blood sausage which was good, but Jeanne could not eat.  Never ask what is in your food, just do you like it.  Called on arrival so they could let us into the apartment and told them we were out front.  Alas an hour later they came down wondering why we had not rung the bell.  We did not know apartment number hence could not ring.  More language misinterpretation.

Then began walking to the supposed tourist area of Florida street which had lots of street vendors but proved difficult to find a travel agent.   Finally one was hidden away and only caught our attention when a vendor outside wanted to know if we wanted to travel somewhere.  The office was right there we just could not see it.

No air tickets to Iguazu falls as christmas time and everyone traveling.  Could get a pickup at airport to falls and hotel but no tour available and no flights.    Burned again by traveling at christmas time.

But made arrangements to go to a Tango show and for a day trip to Colonia, Uruguay, across the river.  Thus we have six days in Buenos Aires which was supposed to be three in Buenos Aires and three at falls,  so OK go with the flow.

Saturday headed off to the number one tourist attraction in Buenos Aires, and the Cementerio de la Recoleta, the cemetery. Evita Duarte remains there. The places for caskets was quite impressive, many larger than actual homes.

Then shopping at the vendors and a street tango performance.  I went to tip them as their performance was incredible.  They thanked me and inquired if I would like a picture.  Hence the tango dancer in crocs.  My sister noted the crocs foot ware and probably the only person to see there is a guy in the picture.  I still can’t see him when I look at picture.

That evening we had arranged for a tango show of which there are numerous in Buenos Aires.  Dinner including wine beer, and delicious carne.  (What else is there in Argentina?) along with a small salad and a wondrous desert.  Then the show for an hour and half the dancers, musicians, and singers exhibited their skills.  Quite the athletes.  Amazing skill, I suspect acquired over years of training.

Sunday we heard there is a great street market where they close the road and vendors exhibit their wares.  As per usual though a few problems:  it was raining, the vendors were mostly of antiques, and not the artisan jewelery Jeanne was looking for.  But walking along did see Greg and Liz from Australia who were on the expedition to Antarctica with us.  A town of 4 million and we come across someone we know.  I am still amazed at how that works.

Purchased another umbrella as had not brought ours along for the day and walked back to apartment.  A nice walk through the city.

Exciting day as we were going to Colonia, Uruguay.  Cross another country off the list, whoopee!  A less than exciting ferry ride across the river which here measures 65 kilometers across.  As near as I can tell this is second widest river in the world, second only to the amazon at 215 kilometers across.  The ferry ride was less than exciting being more a cattle call than a boat ride.  No place to even go outside and upstairs was for vip’s only.

Colonia a delightful place to just wander.  Long clean beach along the river (I tested the water and fresh as expected) the city itself is a world heritage site and is nearly 500 years old.  Interesting history with Spanish and Portuguese invaders.  Spanish wanted to conquer, exploit and declare it theirs.  Portugal just wanted commerce, hence often the Portuguese were just along the coast but eventually had choice of leave or be killed, and Spanish language resulted.  Another case of I am better than you and will kill either you or myself to prove it.

A wondrous lunch of beer and squid looking out over the beach and water and sun.  Umbrella handy today for sun. 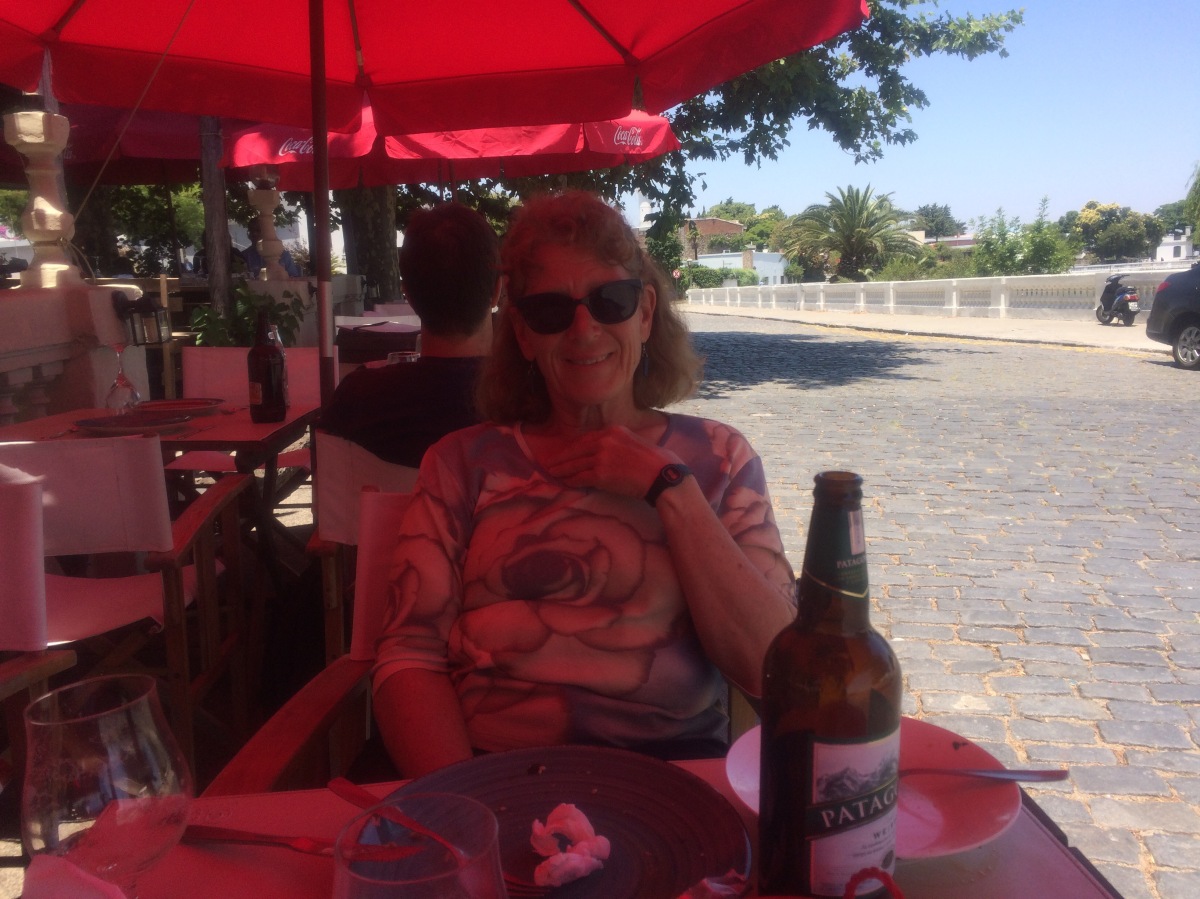 Return on even more unimpressive ferry.  They make a boat very unexciting.  On return to Buenos Aires, tried to figure out cabs but taxi stand seemed only for VIP passengers so we started walking again, this time along the canal, and it proved delightful. People just strolling along in the evening.  Stopped for some beers and to sit and people watch, finally about 8 pm decided it was time for dinner.  Again only ones on arrival but when we left at 10:15 place was half full.

The colors across the canal as the sun descended were amazing reflecting off the glass on buildings on other side.  Pinks, reds, blues, magentas- not the clouds but buildings as sunset progressed.

After a busy few days it was time for a rest and lounged about apartment until noon when stomach growling began and off to the neighborhood perilla 50 meters away for lunch.  No sausage this time but veal and wine.

Off to the evita museum although cab driver did not know where it was and even with address insisted on taking us to the nearby art museum.  We just walked the kilometer to evita museum, with a stop for a Starbucks frappuchino to combat the heat.

The museum itself is built in a building evita used as a shelter for homeless, abused or similar circumstances of women.  Her story is a bit different than that of the musical:  they did not cover the use of charity to increase their own fortunes.  Here they covered labor reforms, voting rights for women, and the buildup of social programs many of which are still being fought about in the United States.  And this was in the forties.  Way ahead of her time and obviously a go getter.  But stil the rich and powerful fought her, although in this case the people supported her.  Although never holding a political office she has pictures on posters and buildings about town.

Back to the canal where I attempted to photograph the previous evenings sunset without success.  The colors did not develop as the previous evening but still magnificent.  Technical camera issues ensued, but Jeanne patiently sat at a nearby restaurant.  The waiter from Italy spoke 5 languages and loved travelling.  He loves Buenos Aires for its liveliness and comfortable atmosphere.  He said he works til about 1 am when restaurants tend to close and the bars and clubs begin to open.

Wednesday 21 December and the sun is high over the Tropic of Capricorn, meaning it is winter solstice.  Here there is about 13.5 hours of sunshine, in anchorage about 5.5.  It begins to reverse with here losing light every day and up north they gain light daily for another six months when the annual rotation about the sun again changes again.

We celebrated by going on yet another tourist activity.  This entailed a 2 hour bus ride out to the estancia (ranch).  In the states we would call this a dude ranch.  On arrival they met us with wine and empanadas which were delightful at 11 am.

Then for the horse rides.  One should definitely ride a horse at least once a century, and I have now met my quota.  Took me 5 times to get up onto the horse, as I seemed to have difficulty using the mane as a handle.  The saddles here are not western saddles and do not have the handle in front. (Yes I know that is not the purpose). After a kilometer I was sore. I can ride a bicycle thousands of miles without being sore but a horse ride does me in.

Then a carriage ride and as with the horse ride the best part was the birds: burrowing owl, cara cara, herons and a bunch I could not identify.

Lunch was a 5-6 course meal of numerous meats, a small salad, and desert.  Along with beer and wine, plus coffee after.  Then the musical show and dancing.  Songs by a “gaucho” then tango dance demo again very artistic and athletic.  Some gaucho dances with bolos and delightful along with some of us in crowd getting up and dancing.

After the show off to the fields where the gaucho horse show began.  Not your usual cowboy harassing cows in a variety of ways, but a high speed run with a tiny stick about the size of a finger which you had to spear a ring hanging down.  Most runs they succeeded after which they rode up to the crowd and gave a lady the ring, along with a kiss.  Jeanne’s’ ring fit nicely over her middle finger.

On return to the city our guide said demonstrations were taking place and would be difficult to get us back where they picked us up.  Our pickup point was not necessarily near our apartment, but planned on another cab ride.  The guide advised against a cab ride due to demonstrations as we would just sit in traffic.  Ok we would walk which was acceptable as only about two kilometers, although finding walking on cement is harder than on regular trails.  Along the way we saw no signs of demonstrations as we know them but power out occasionally but not an issue. ( think, traffic lights).  Traffic although it appears quite crazy, is rather civilized once you figure it out.  Not one incident of road rage or rushing, was rather pleasant and great fun to drive about and see the city.

And I think I love Argentina.  Having ridden the Andes trail and spent several months in the country, it has such wonderful varied sites. Mountains, deserts, glaciers, beaches, oceans, and a people who are friendly and proud of their country, as they should be.  As per usual the people are just here making a living where they are born.  The government is often as separate entity.

In 1967 I was an exchange student in Germany.  I had been taught that the United States was the greatest country in the world, but I found perhaps there were other places that are great too.  I had been taught of the atrocities committed by Germany, but discovered it came from both sides.  Perhaps we think our home is the best because we understand it.  Again I am better than you thoughts prevail. But maybe that is not so, maybe just different and that can be exciting.  Embrace the diversity.  Just because we are different does not make us better or worse.

And I wrote this enroute from Buenos Aires to Santiago Chile. On arrival I attempted to save and everything except pictures was erased.  Internet at airport is very slow, frustrating, and intermittent.  I have what is called a sky roam which connects me to internet via cellular network but it seems similar to airport wifi.  Ugh.  I think I will try and post and edit more when arrive in Dallas in 12 hours.  Well go figure as I posted this at Santiago airport wifi pictures would not show and writing was sporadic, but I look here in Dallas on arrival and shows up, so there you go. 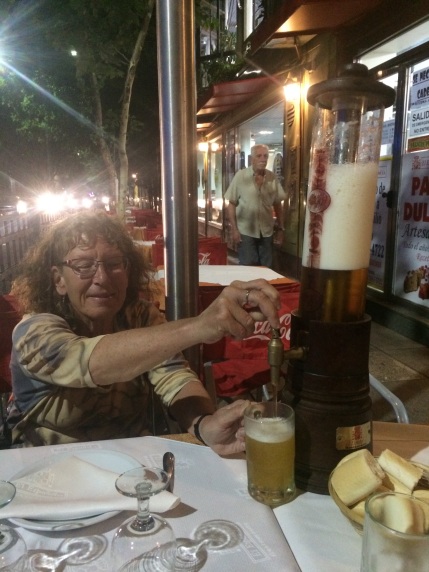