With some regret we left Manang, but again it was best with gear and a porter. Manang has a lot of day hikes and would be funne to explore, but then I would feel more guilty about not going over the pass.

Rakees although his English was near non existent was very good at figuring out what was needed,  almost too good. I am not used to that kind of service. And it was a lot easier to let him make arrangements.

We arrived at the requisite 7 am and of course stood around for quite some time, I not know what was going on. One jeep left 2 drove up from somewhere. One western couple walked in got in a jeep and with only 3 other people they took off. Finally we loaded bike with careful supervision and other gear. Then 10 of us boarded. Because I paid more or I was a westerner or whatevet I was given the privileged left front seat. And only 3 of us up front. Next to me sat a Nepali who also had altitude sickness while up at 4900 meters. I understand it was a very arduous 13 hour descent with him. But feeling good now. Turns out the girl of the couple whom I saw later also had altitude sickness, the day I did.

There were 4 in back seat and 3 standing in back, including Rakees. I would have paid for him up front but had no idea how the disbursement went.  There is definitely a local price on everything. Ok by me as they make next to nothing.

Off we went bouncing immediately and soon came to next village where we brought full complement of people to 14. A lady with her 1 year, and one other guy.  She got  privileged seat sitting in the back. After a few hours she and babe were moved up to left rear seat.

10 hours with everyone speaking Nepali gives one time to ponder. It did not take long for my mind to go numb though, unfortunately my body did not follow and it became bruised on the left side from hitting the door and frame so many times. To say it was a rough 4 wheel drive road is an understatement.  Probably one of the roughest roads I have ever been on, much of requiring 4 wheel low and all requiring 4 wheel drive. 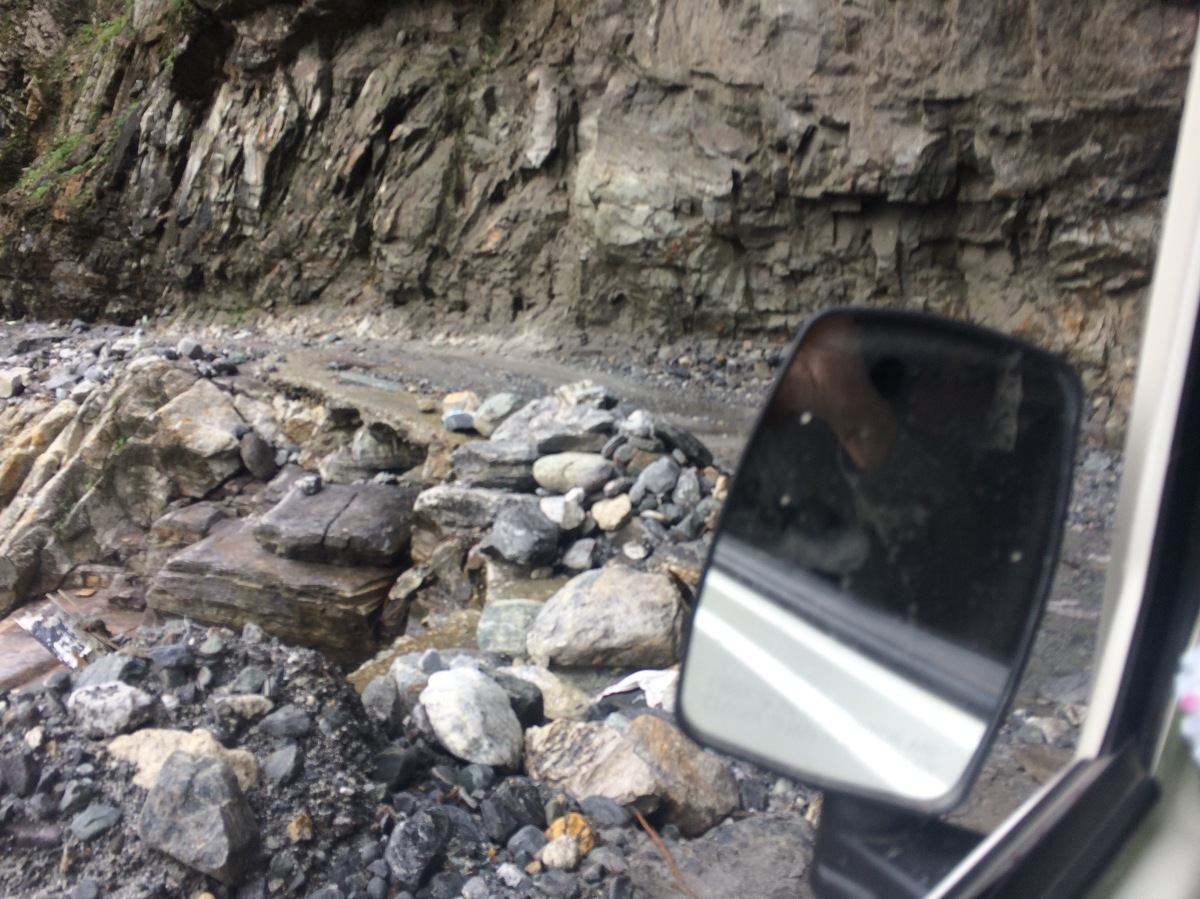 And so for 85 kilometers in 10 hours, with a lunch break at the waterfall, near where we started bicycling a while back

And I had been told there was a wave of trekkers beginning. It was true peak season is yet a couple weeks away. I am told at peak a thousand people a day cross the pass.

We are at sunset and started pouring rain. It took 4 hotels before we found one with two rooms. Rakees nearly collapsed when he jumped down from jeep. It was downhill and he gladly accepted offer to coast the bicycle down. I carried my bag. Whooppee!

A very quick meal and I was asleep.

Next morn at 06:30 up and at em. Pouring rain!  I did not know it could rain so hard. 8 am and we were on mini bus (a Toyota van) to pokhara. A much more sedate drive than bus from Kathmandu to besishahar. Horn only went off about every 10 seconds and did not have the turbo boost of the bus. (Both engine and horn). Arrived to busy pokhara about 12:30 so noisy could not get phone call through to hotel and ended up taking a cab. Rakees was to leave next day but bus to Kathmandu in an hour so took same cab back and a long bus ride to Kathmandu. I never did know if he has another job.

After eating a great meal of Dahl baht I collapsed in room.

Awake and did a bit of walk about town. Cannot see lake as all built up along waterfront (without any view) pokhara although nicer than katnandu has become another city. Lots of adventures and things to buy jungle tours, trekking, zip lines, rafting, bungee jumping, hang gliding, home stays, dvenryres af nauseum. I just want to ride my bicycle.

But started insurance claim. How do you explain you have no receipt for the jeep ride yesterday because they had no paper. Today the hotel drove to a copy store to print out an email I had sent that needed printing.

But am glad I got a Nepal SIM card for phone as the 11 minute call to insurance company cost 23 cents. But the physician and hospital charged $100 to sign form saying I had altitude sickness. Should have donated the $45 to Himalayan rescue association in manang. I did not because wasn’t sick as I had recovered then, and why would you pay $45 for a doctor signature. (Because the insurance company says you will). Combination of third world and first world problems.

Oh I forgot and will add after published. This morning hot up for breakie and there sat Rien. He arrived late last night after a horrendous 13 hour bus ride from Jonson. In descending from the pass he hit a rock and front tire popped off and uncontrolled. He went over handlebars and did something to shoulder. Went to Jomsom for x-rays but did not show anything. But he is also off ride. Going home as unlike me can’t ride or carry anything. Bummer. But was good to see even if he did only get one more day than me.

2 thoughts on “What a long strange trip it has been”