“Wise words are rarer than emeralds, yet they come from the mouths of poor slave girls who turn the millstones.”

Nice evening in butte and Hotel Finlan in downtown a good place, one block off track. The new track is good as brings you through Butte. Nice to see the history and story, although I suspect one needs numerous answers because sometimes the story seems a bit over rosy.
A pleasant ride out and up our 5th divide crossing back to the east side although we are heading west. The continental divide curves around a bit. Then the “dive” down 5 miles to go under interstate 15. A whole different viewpoint from driving the ribbon of highway, just staring at the ongoing road, perhaps glancing at the countryside without feeling it. Biking definitely gives a different viewpoint: one feels the hills, feels the heat, feels the asphalt or as today the variety of gravel.

Then the 7 miles to beaver dam camp a nice place, although the loose gravel, washboard and 7% slope was a bit tough at end of day. Good practice though!

Beaver dam camp nice and no one else there. Pleasant sitting around for the afternoon. Then after a beer and two gin and tonics I decided to climb the 100 foot outcropping of rock. Took a bit to find a route which included two tunnels through rocks. Did make it to the top after about half hour. Would have been easier in something other than crocks for shoes and the effects of g&t. Carefull!
Then to fleecer ridge continuing on up the slope. A few cattle guards with broken rails, then hike a bike up. Again, as with Joe, difficult route finding with directions saying going toward lone fence near the top. The lone fence is a single post 90 degrees off road. And the top is 2000 feet higher. Hmmmm. 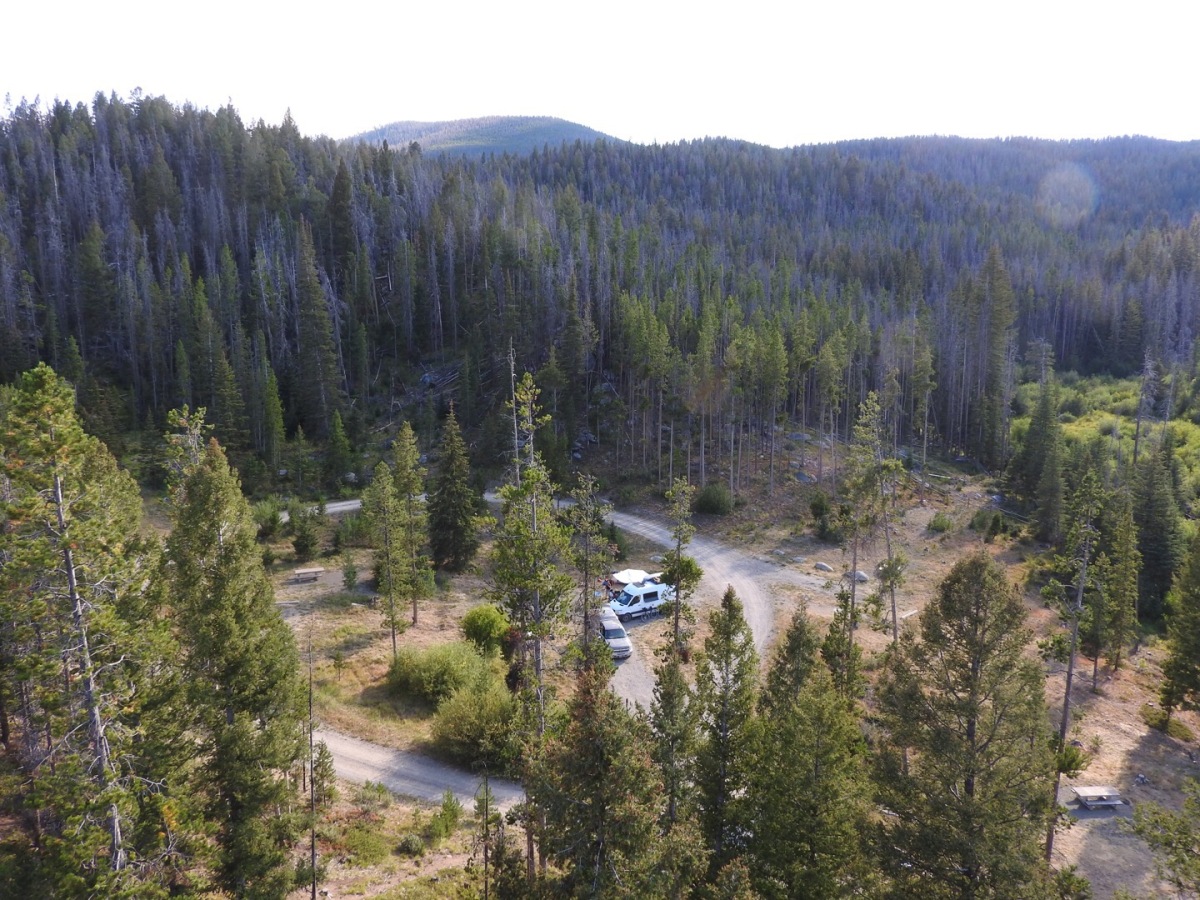 The descent which my garmin said was a 37% slope was as memorable as ever. Keep the back tire behind the front. A lot harder than it sounds. Switchback through the sagebrush. Then down a rocky rideable 4 wheeler track meeting up with a badger ambling up the track. He looked at me and removed himself from our route. Onto a good gravel road a through the town of Wise River. A visit to sweetwater ranch where Constance and Dave had friends. I asked Levi the difference between hay, Straw and grass. Hay is just mown grass. Straw is the stalk of a different grass.

Another nice day of riding all pavement which was fast. We arrived here in Bannock, Montana about 12:30. Wondrous ride over and through the pioneer mountains. And wifi in the campground. What will they think of next?  But slow and cannot send pictures so think I will wait a few more days. Hopefully Lima in 2 days.

Jeanne drove into Dillon and James hiking while we rode. She went in for supplies. (Gin, tonic, and a few fresh foods). We all arrived here about same time which was too bad for Jeanne, as she wanted to ride back to meet us, but we were too fast.  The others wanted to go to Dillon, but I opted to stay. They wanted showers laundry and the patagonia store for shopping.  Jeanne decided to stay also, so it is just the two of us. Very nice to be alone.

The creek has a great pool so we went and had a great bath and washed the salt out if riding clothes. Sweet. And I have a different view of Montana this trip. Incredible mountains and  Vistas. I think the difference is not as hot as 4 years ago a balmy 85 on arrival as opposed to 100.  Big difference. Montana can be a nice place. As with most things one must adapt and fit not change the state or desert or whatever.

And arrived Lima about 12:30. Was a cold morning. 3 degrees c (about 36 f) and downhill fast.  The road yesterday said bridge out but sign was beside the road so went there anyway.  And another sign saying bridge out about 10 miles from end of medicine lodge big sheep road.  But all bridges intact, guess it was for a bridge a few days ago and another in a few days.   .

More riders along the way; Mike from sanfrancisco riding from Proudhon bay to Argentina.  He also wondered when they will finish the route from north to south and not just banff to Mexican border.  The route is already there, just needs the maps and directions in one place.  And Daniel from Oxford England last eve passed us going up the 15% grade to medicine lodge big sheep pass.  It was only a few miles to supposed camp at Morrison lake which Jeanne and Constance (who were driving the finish of day) could not find and made camp at junction.  We enjoyed an incredible show of caveman tv watching the clouds move about and colors change and sun set awesome.

I wonder sometimes what the locals think of having an international bike route passing through their area.  People from all over riding the ride.  Met a father daughter two days ago riding shout to north.  He was from Dubai, she from Canterbury England. Staying at the motel in Lima, Montana the owner says they started in 2004 and had 30 divide riders stay in the motel that year, this year it has been 200.  And that is only people stopping at motel.

Having a grand time I found the charge to my big camera and shot about an hour of time lapse pictures ( about 1200 pictures).  Hoping to put on computer and get the video.

One thought on “Somewhere in southwest Montana ”