Monument to the wind along road, although I think it is a directional beacon for alien spacecraft.

Departed the bush camp early in hopes of lengthening our rest day in Puntas Arenas, and our hopes succeeded. A quick 100 kilometer arriving just before 1. And about 20 k from town was a large lake on left to the east. The garmin said Oceana Pacifica. It is the straights of Magellan. Wow. I have read and heard of this country since I was small. The stories of explorations, discoveries, history, and people for the last 600 years are impressive. I was awestruck at finally seeing it, Tierra del Fuego across the channel. We are getting south.

Found the hostel after a bit of wandering the neighborhood as Garmin directed us this way and that. Then the usual question of what is this place going to bring. As usual several people opted prior or immediately on arrival to get their own places closer to town or alone, or with better wifi (without 40 people trying to log on at once), or just to get away. As for me it is fine sharing a room with James and the shower had hot water which is sort of unique. Everyone commented how fast the internet was although the system refused to allow me on. Max says apple products sometimes have difficulty due to their higher security, but others apples products were logged in. I spent much of the afternoon frustrating myself trying to log on without success, while others typed away.

But wanted a tour of penguin rookery and today was best day as occurs in evening. The birds are out fishing during the day and return in afternoon. Thus signed up for a 5 pm departure on boat. Michelle, Joost, Letty, Bridget, James and I took a cab to boat harbor, and boarded the ferry for two hour trip to isla Magdalena.

Just before arrival at the island an albatross took off beside the ship. Then as we neared the beach (ship is a landing craft with drop bow) the birds appeared. Again totally awestruck at the sight of these storied birds waddling by the thousands about the beach up on to the island. These are Magellan Penguins and follow the light from here to southern coast of Brazil in winter. About 40 centimeters high and as cute as one imagines. They live in short burrows which are dug by them throwing dirt everywhere. They mate for life and anthropomorphizing them one imagines the love, caring, squabbles, and trials couples go through.

The park is very good about controlling the hundred or two hundred visitors dropped off by the “Crux Austral” with roped off areas and a few guards to keep track. Penguins get priority, but all were good and close with centimeters. Again I was amazed. Had seen penguins when in Tasmania but nothing like the thousands here. I have not seen wildlife viewing like this since seeing the masses of caribou in the arctic.

Awoke this am with a full list of rest day chores: write this, blog, charge batteries for the next days, bike maintenance, laundry, breakfast, and most important find coffee. Then discovered this hostel serves breakfast so two items covered quickly (except for the savoring it part, which was done in the good company of others). And the hostel here does laundry so for 10000 Chilean pesos (about $20) I get all 4 kilos of clothes washed by someone else, and not done by me in a sink, shower, or creek. Life is good.

Then on to the bike and redid bottom bracket as creaking two days ago in the wind but seems ok since then. Just preventative maintenance. Chain needs changing, but will let it go to Ushuaia and put on a new one there, utilizing all the spare parts I brought along except one set of brake pads, one set of shoe cleats, and a set of derailleur cables. Knock on wood (that is for good luck) the bike is working well still, although the engine is still slow, but steady. Max gave me his chain lube as mine is almost done and he is now done riding. (Remember he only goes up hill, as he finds downhill and flat very boring and prefers to ride in truck)

I still cannot log onto internet with phone but working away with others while on my iPad. Like I said life is good. Manage ones frustrations.

Everyone is looking at the end, excited to be done and succeed, but also that apprehensiveness of changing lifestyle and returning to our usual worlds. The holiday is coming to an end and reality is working its way back into our lives. Have we changed, learned, grown, or figured anything out? Other than 42 is there meaning to life? These are life’s little problems.

Walked the 10 blocks into town along the beach front which has a very nice bike path, walkway, seats, exercise areas, (as are throughout South America), basketball courts, and generally nice beach front, although windy. It seems people here are just used to the wind, no one seems to be bothered by it, just dressed appropriately. A nice town square with statue of Magellan and the fuegoans beneath him, and nice trees. A town square is valued here in every town in South America I have been too no matter the size.

A great lunch at local restaurant pub of lamb and potatoes. A good walk back to hostel and ready for the final week. Legs still sore from trek the other day up to Cerro Torres, but feeling good. Can easily do 150 kilometers on a bike but walking a short distance hurts. And other than that Punta Arenas seems another town. Will be good to be on the road again. 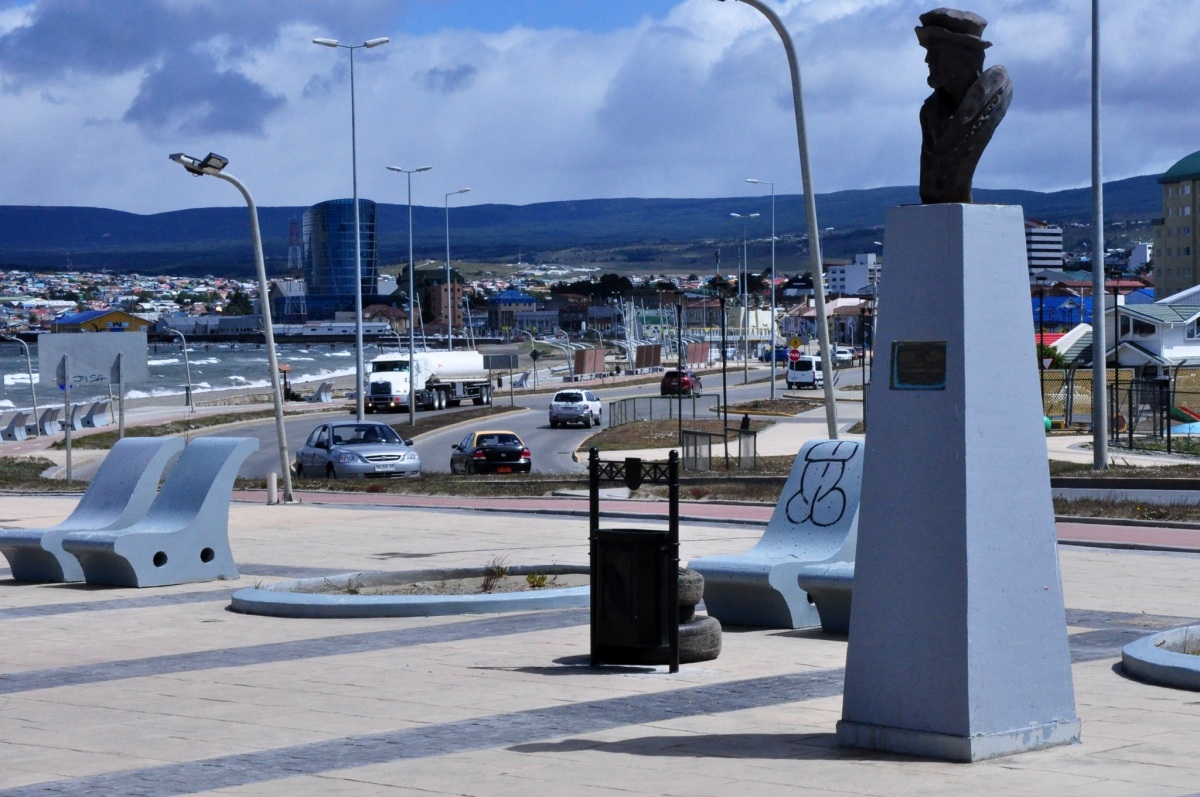 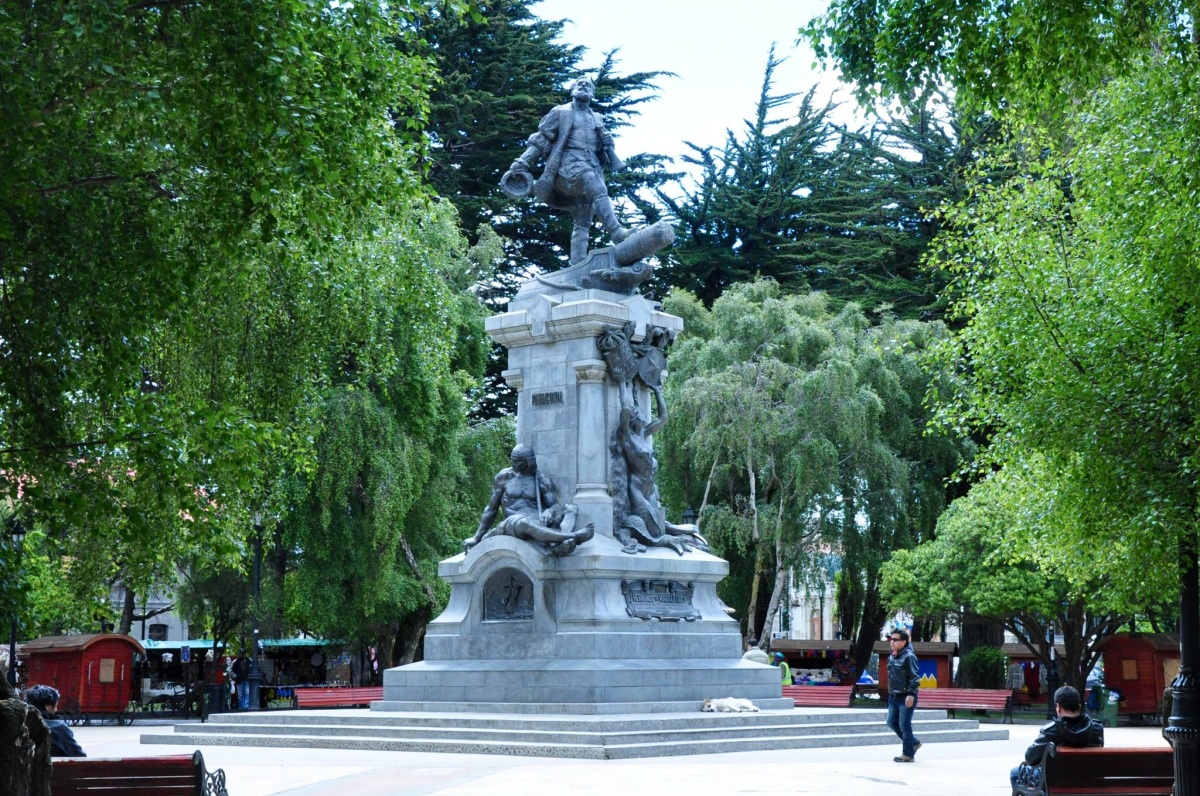