Just because the end is in sight does not mean the days are easier. Day started during the night with wind throughout the night. I was afraid tent was going to flap itself to nothing. The only way I could calm the wind down was to try and record the wind inside tent on phone. That worked to quiet the wind, but alas I have limited batteries so could not keep it on continuous. When 6 am arrived it was blowing and raining. I dressed warmly with extra gear and tried to go light as I knew it was a big long day. Then opened the tent and it was beautiful outside with blue sky’s and those incredible mountains above us with a fresh dusting of snow on them.

So off we rode 134 kilometers all but 10 k unpaved starting with a 250 meter climb. I decided no pictures as needed to ride, but that idea was broken quickly as could not resist those mountains. Rabbits, guanacos, and a few condors to add to incredible start of the day. 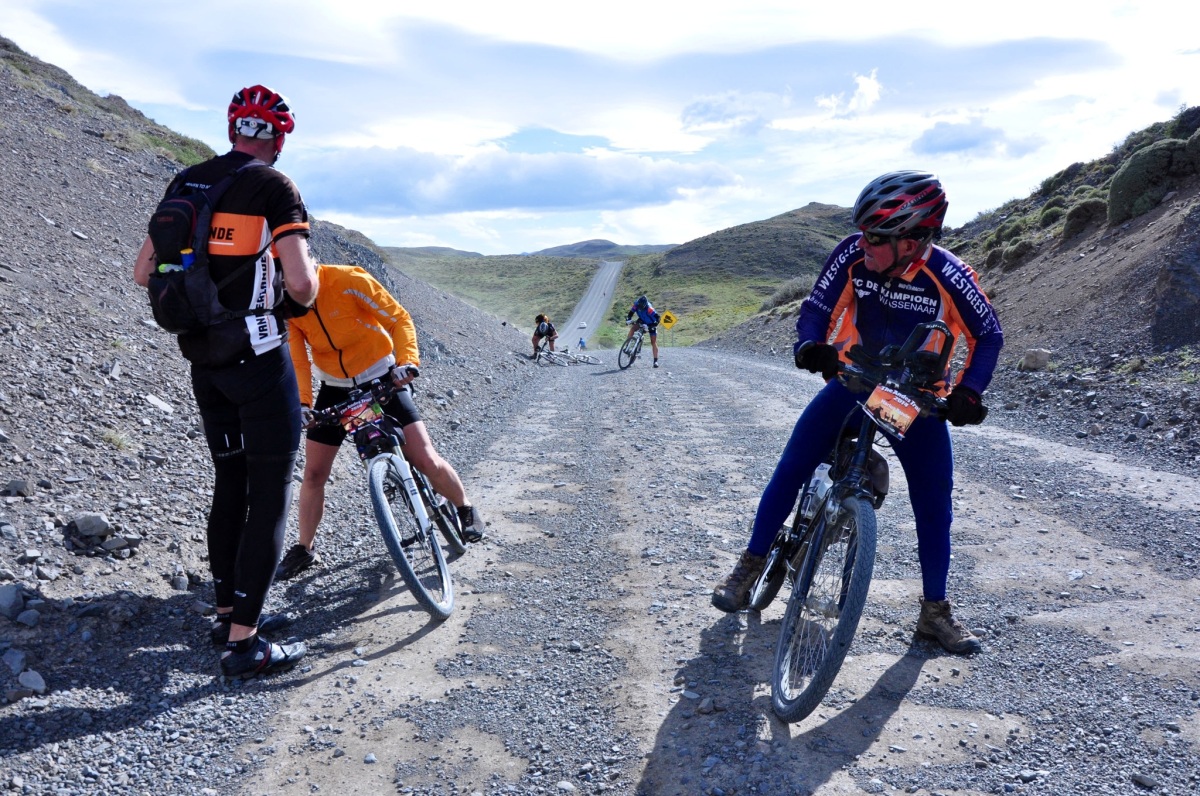 Topped out the climb and wind started. It was another wind event to match earlier winds I have had. Walking difficult downhill. I told Michelle and Joost I used my walking muscles yesterday and they were not to be used today but I was wrong. Walked probably 7 k of 50 to lunch. At one point a gust hit me while walking the bike, and grabbed the bike lifting it over my head. Gravel was flying and hurting. One car stopped to take a picture of me and I pulled down face mask to show I was smiling and he said “Welcome to Patagonia”! The last 4 k to lunch was a wide open area and later found out winds at 99 kph plus gusts. It was brutal. Definitely had trouble standing but tried riding. At one point on bike riding but just skidding sideways in the wind. 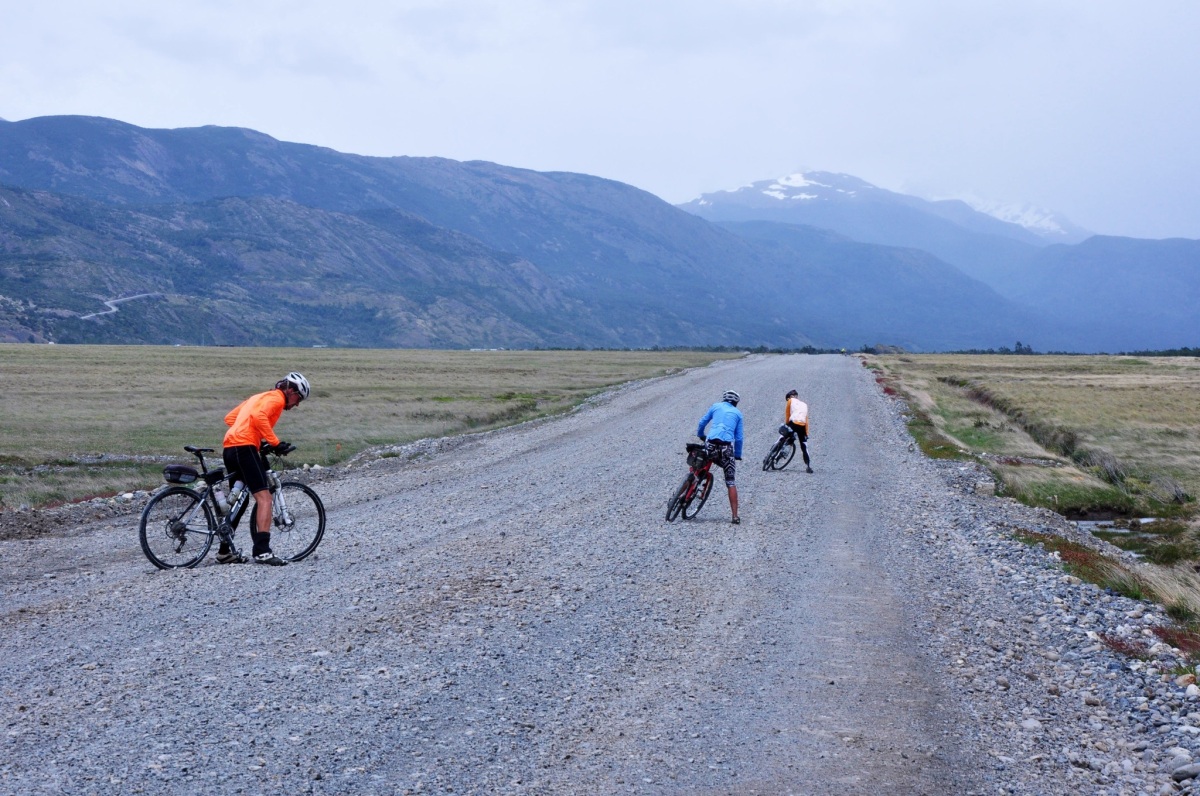 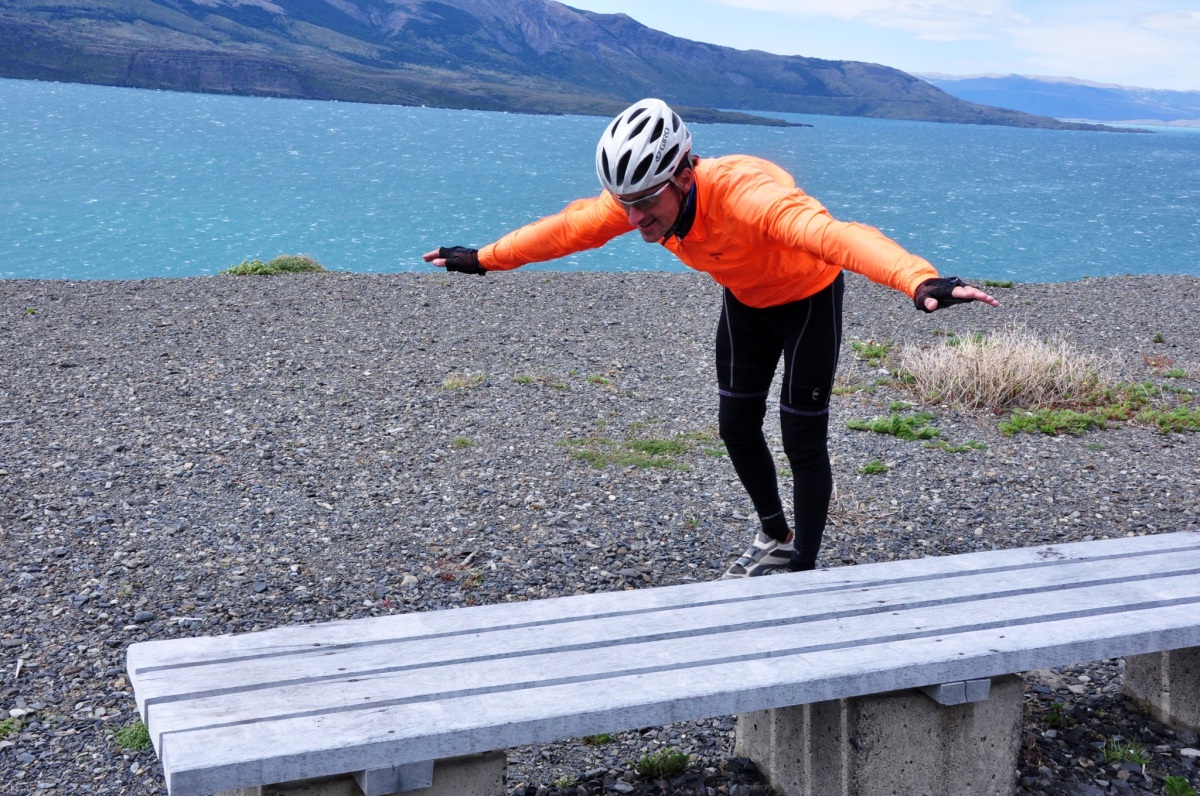 Anyway made lunch in park entrance station which turns out had wifi and decided to call Jeanne. Great but still hyped from the bike ride then Walter called a meeting to tell everyone of plans. I had to cut off phone call and leave Jeanne dangling as to what was happening. Most of the 17 people said they were taking truck, but there is only room for 9. Dissension seemed the operative word. I decided to continue riding as did James and Diederick. It had taken us 7 hours to go the 50 kilometers to lunch and 84 left to go.

Turns out it was a good decision as road was closed and truck had to go back around a 3-5 hour trip. Bikes could go through the construction and there proved a tailwind, with road paved for 40 of the 84, and throughout the 20 kilometer of construction the road was ours. Beautiful valley and nice ride the three of us generally riding together with a strong tailwind pushing us up the hills. One could detect the old terminal and lateral moraines of the old glacial valley.

Arrived about 7:15 making it a long day: 11 hours of cycling with nearly 9 hours of movement. Generally that movement would be saddle time but today some walking the bike, probably 7 k worth. But turned out good, and I am proud of myself as 1 of 10 to complete the whole ride today. I may not be the fastest but I can hold my own. Like I said I feel proud, although those of us who completed the ride are generally keeping quiet as those that did not, definitely did not have a good day.

And I confess had not planned on using my walk muscles today. After yesterday’s hike they need a rest, the walk muscles are sore.

It took less time to ride the 146 kilometers ( 6 hours) than the 50 kilometers to lunch yesterday (7 hours). And quite a ride, tail wind for much of it and what a difference. At one point doing 50 kph and still feeling a strong push on my back. At the end of day it was the fastest ride yet average 2 minute 5 second kilometers. For almost 100 kilometers heading east, then we turned south and that means the winds were cross winds. Not nearly as fast biking and throwing you around. Watched Hanne and Marias, with Marias on right windward side angled strongly whereas Hanne on the lee side was upright telling him to not wander about the road and come so close. No choice.
0.jpg” alt=”IMG_1514-0.JPG” class=”alignnone size-full” /> 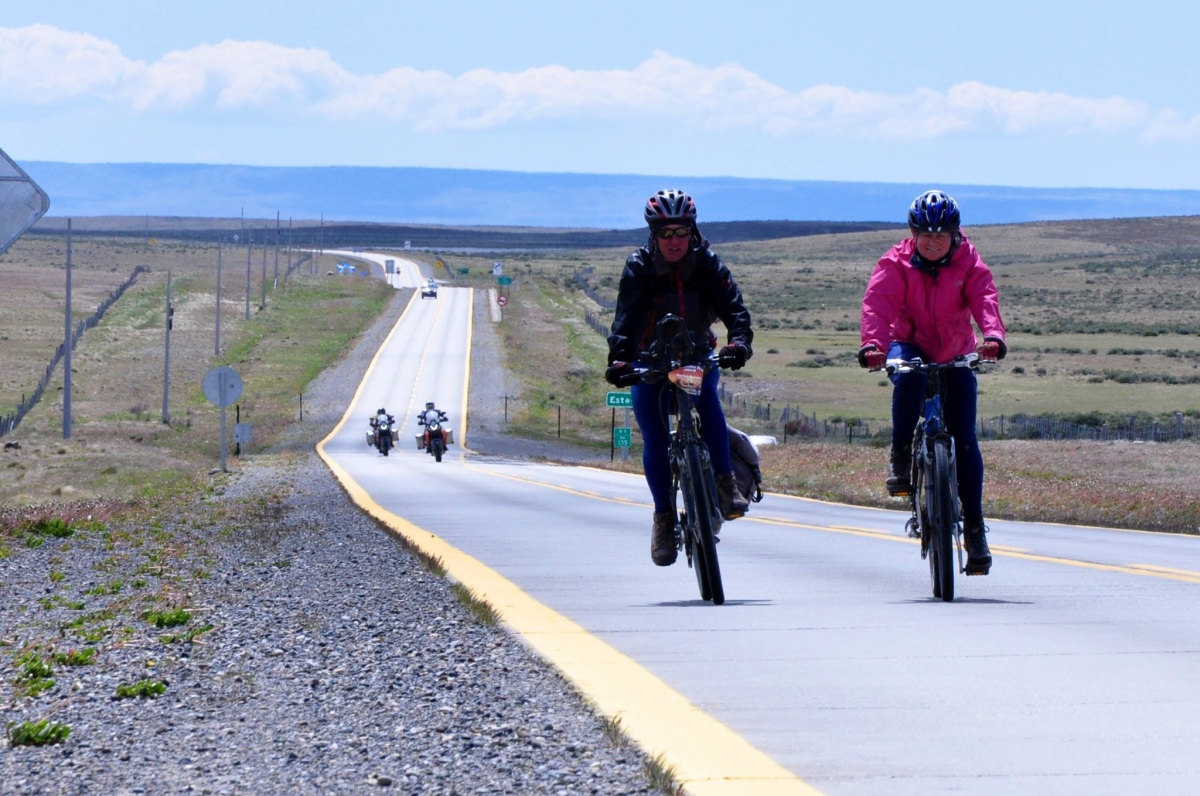 Tonight a Dutch Christmas. Each of us had picked a name from back in El Calafate. You had to get a present and write a poem with it. Tonight one at a time all 32 of us were given the present from a sack brought by Santa Claus. When your present came out you had to read the poem out loud and show the present. The poems were good and interesting as not always translatable into the various languages spoken. Quite fun just to listen to the accents and translations. This was my poem which came with a buff, a most useful present.

J. R. Riding on his bike,
It’s something he seems to really like.
Moving along with sunburned lips,
Hope he has learned a few tips.
Bouncing along on the gravel roads,
Thank goodness he’s not carrying a heavy load.
He likes to take pictures along the way.
But he knows he cannot stay.
Time for him to get to lunch,
So he can really eat and munch.
Back on the bike he moves along,
As he listens to some songs.
He can choose to move like lightening,
And he really looks quite striking.
With the wind at his face,
He says “this is not a race”,
I set the pace
Into camp he rolls in,
He says he has seen St. nick
I know this must be a trick
Only in J. R. Style,
He flashes me a big smile.
With a twinkle in his eye
He lets out a big sigh
Thanks for the travels in Argentina
Farewell to all and see ya!

One forgets it is Christmas as there does not seem to be the commercialization as at home. I saw more Christmas decorations Ii. August before I departed than all the time here. Not a sign or a Santa Claus. Quite nice. More intent on the meaning than the buying, it feels like.

But in camp win blowing starting to rain, I am trying to get rain fly zipper to stay closed. Only a few nights camping remain so will make it work. Two stages have been combined into one 150 kilometer day as camp sit no longer exists so ling day and rest day in hotel along the way. Two rest days in next week.

Terry leaves tomorrow as his son graduates from medical school and wants to be at graduation. Good for him, but we will miss him.

And so in punto arenas which is proving awesome more to come tomorrow. For now will post.