“I have seen some memorable things in my life, and today’s ride ranks up there!”
Terry Wall from Australia

Well we did it, and Terry summed it up best. Absolutely amazing. We left camp and rode a hundred meters down a ramp onto the salt, two flamingoes feeding beside the road. The salt is that,salt, and flat polygons just as seen in the arctic, only about a meter across almost all five sided, with the ridge between polygons a centimeter or two high. You can ride anywhere or direction, but there is a road leading to the island where we were headed.

After 40 kilometer we reached the lunch truck and drank and ate a bit. For 10-15 bolivianos you could walk about the saguaro covered island. I opted to lookand not walk.

After lunch we changed direction from south to east for 62 kilometers. It was like sailing on the ocean, the horizon went on and on, just an occasional snow covered peak at the edges. The salt flats is 25 times the size of Bonneville salt flats in Utah.

And I may change my perception that south is downhill. Easy to prove, put a marble on a globe and it will go south. When headed due south we were cruising at 22 kph and when going due east we were cruising at 28. Maybe east is downhill. Perhaps I did not account for rotation of the earth. Or another theory might be there were several tour buses going to the island and the “road” was more hard packed, or maybe the tailwind. Whatever we just cruised everyone stopping to take pictures frequently.

With about 10-15 k to go Terry and Elizabeth caught up with me and we finished the final bit at 30 kph. 103 kilometer day in 6 hours including lunch and photo stops. 4 hr 20 of riding. And very glad I had completely covered myself head to toe with clothing. The sun was intense on that white surface. Like being on a glacier.

Finally a building of sorts appeared on horizon and our accomadations for the night. The hotel is basic roof (fiberglass or thatch), walls (entirely of blocks of salt), door of wood, and a salt floor.. In Bucks and my room the floor is salt bricks outside it is more like beach sand. And that is our motel, there is a flourescent light but it does not work ( may require a generator), and no water (bike dreams truck has a 750 gallon tank but we are on fourth day). And no bathroom, well I have been told there is one but best to avoid if possible. Hence I a in a quandary whether to put on the SPOT locator for Jeanne a motel or camp. If one does not like it land is 7 kilometer away.

A delightful evening dinner with Marias, Hanne, Joost, Buck, and Michelle, and myself. Lots of time for discussion as were told dinner would be at 7. Finally finished about 9:15. Bolivian time. But turning in to a wine drinker and enjoyed that last eve. Chilean wine for 100BOB ( about $15) . We discussed our favorite food or meal (waiting for dinner) (generally included good cheeses, and Alaska salmon) and favorite movies (Enemy at the Gates, Cold Mountain, Out of Africa, Amalie, and Soldier of Orange). And Marias and Hanne knew the three French people cycling from Anchorage to Ushuaia. They had cycled with them for a few days two years ago when Marias and Hanne were cycling Anchorage to San Francisco. Then off to our dark room and to face the bathroom. As to motel or camp. Definitely a motel as camp is way more comfortable although this salt block bed is not bad. 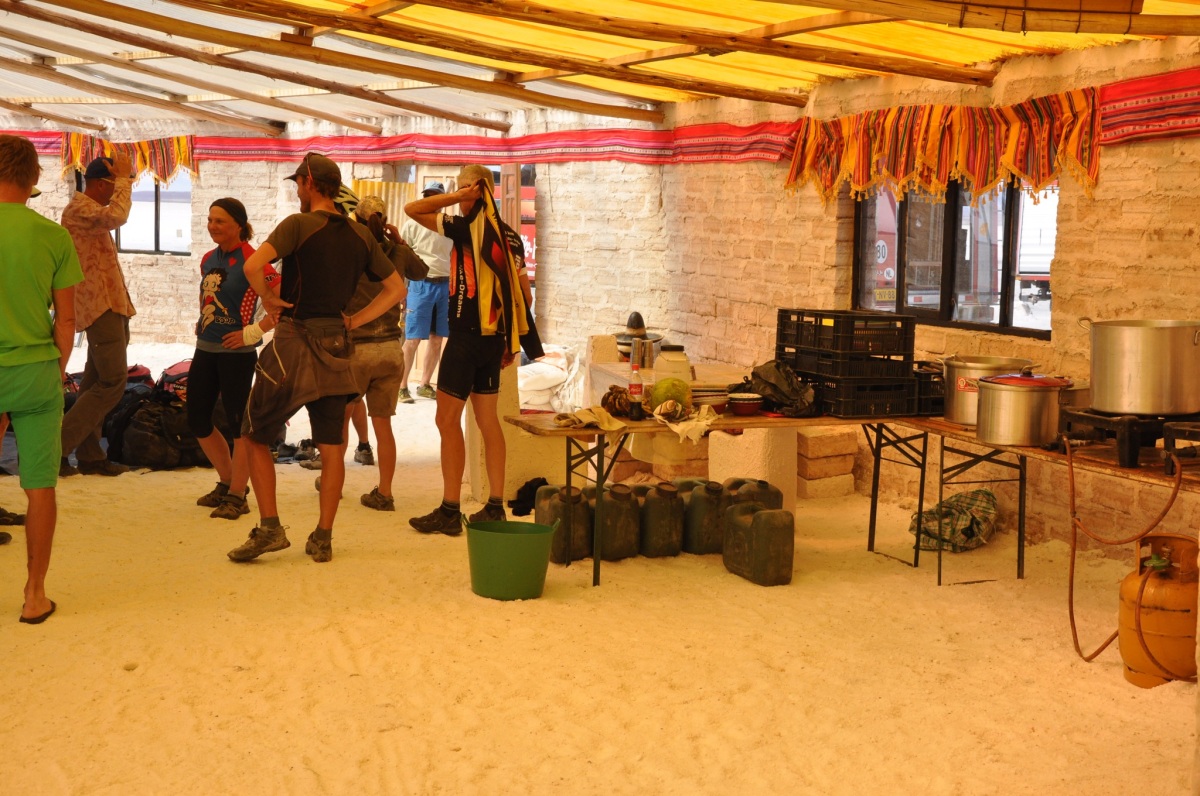 And posting this rapidly as had written a long blog covering past week instead of hitting publish I hit discard. Now trying to recover.