It is by riding a bicycle that you learn the contours of the country best, since you have to sweat up the hills and coast down them. But you remember them as they actually are, while in a motorcar only a high hill impresses you, and you have no such accurate remembrance of country you have driven through as you gain by riding a bicycle.

Great day and am beginning to understand the routine, up about 6 (first light about 5:30) organize self, decide on bike clothes for the day, breakfast at 7 and discussion of days plan. 8 am load trucks with gear. Gear is separated into three bags: camping gear (tent, sleeping bag etc) which only comes out at camps, a bag of not needed stuff comes out only on rest days, (spare tires, parts, and things only needed in rest days). The final bag is day bag of things used everyday. That one is by far my heaviest.

This morning we left as group because of Cusco traffic and not a timed day to prevent racing in traffic. Stopped at Plaza Mayor for pictures by local newspaper. Then a lap of all around the Plaza with more pictures in front of cathedral, and finally off. It felt good and I realized I had wasted a good worry, wondering if I could do this. Once on bike I remembered I knew how to ride and it was fun.

People along the sides were cheering us on and the police stopped traffic at numerous stop lights so we could go nonstop through the first part of town. Then onto a busy road and we moved to the southern part of Cusco, eventually reaching outskirts and a pace line developed about 20 miles into the ride, which at this point was slightly downhill. We were cruising at about 35-40 km per hour, and it was a kick. But the roads like the sidewalks require constant vigilance as grates are not always perpendicular to the bike wheels, there are holes and bumps, curbs, and traffic going in all direction. There does not seem to be a 3 foot rule here so cars, buses, and trucks occasionally come close.

We wound our way to the Urobamba river and proceeded to slowly climb the valley the rest of day. It is the same road Jeanne and I travelled nearly 2 1/2 weeks ago on our bus trip to Puno. Camped at same Inca Ruins we explored on the tour. Remnants of one of the largest Inca buildings is here. Only the wall remains. A beautiful camp on the grassy flats. Not sure about latrines, as none. One of the girls commented not many trees for them.

But currently laying in tent pondering if I need to put up the rain fly as would be awesome stars tonight, but can hear thunder in mountains..

Wow I made it to 6:50 and now in tent trying to ID stars. Very nice stars with the Milky Way. Spent afternoon lounging around. Went to the town square where tourist stuff was set up, took pictures and just enjoyed. Just finished dinner and now in bed.

And many concerned about tomorrow hence a 6:15 breakfast and early start. We are at an elevation of 3475 meters with a climb to 4335 meters and descending to Pukara 159 kilometers away. One of the bigger distances on the trip. And tomorrow we enter the altoplano which we will cover for nearly 3000 kilometers in 4 weeks. Mostly flat, but high.

Awakened at 5 am by loudspeaker over the valley with some political announcement. Peru has an election coming up 5 October. Pack up tent and sleeping bag a bit wet do to dew. It did freeze last nite, but once the sun hit about 6:30 it warmed up nicely. Depart at 7:15 after packing trucks.

A great day of riding but long. Made it in by 4 pm and distracted by soup before completing mission of getting camp gear. Then it started to sprinkle and I went to set up camp. Area is like the high desert but no sage brush, but has cow patties. Nice place but hard ground. And as finished setting up tent it really began to rain stopping when the truck siren went off announcing dinner. Good timing.

As for the day, 20 k very pleasant gradual up then started climbing for the next next 40 K arriving at pass (Aba la Raya) at 4335 meters about 11:30 to another awesome lunch. Roll, meats, cheese, guacamole, onions, veggies, and bananas and apples. 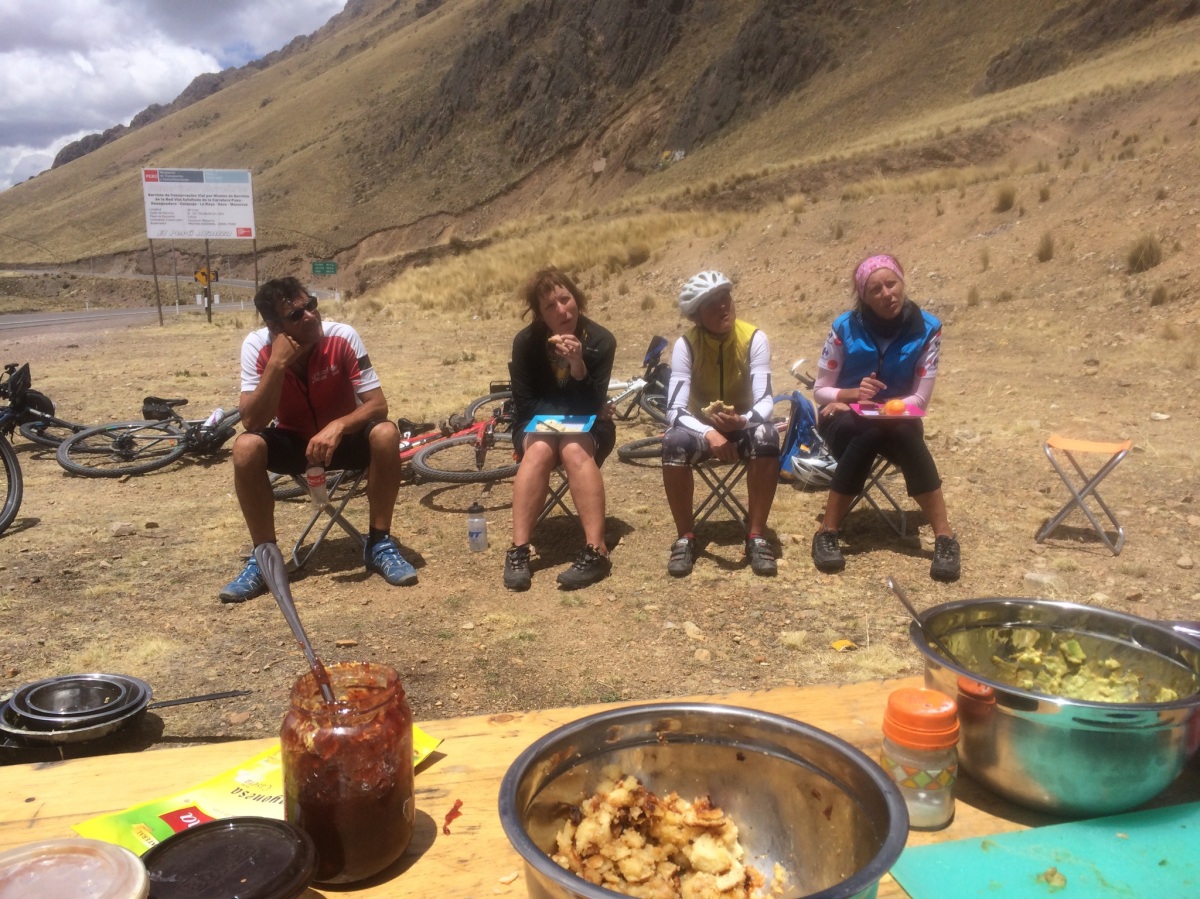 Beautiful descent for 25 K averaging 40K per hour, then flattened out and kept a steady 20-25 K for the last 75 kilometers to camp. At first rode with Mario just so we had someone to ride with, but his gut was off with diarrhea and after 2 times for trip beside the road (no shelter or cover anywhere) he decided to take the truck which was still behind us, then I rode for a few kilometers with Hardy from Germany. He just joined in Cusco after riding Germany to Spain and flying to Brasilia and taking 3 months to ride to Cusco. He leaves in Mendoza and will ride to Rio. Says will miss trip south to Ushuaia, but stated one always will miss something. Better to just enjoy what you have. I have to agree with his philosophy. After a few K I left him and rode alone for remainder of day. Other riders way ahead.

The birds were amazing. Hawks mostly, a kestrel like bird, but appeared like a peregrine but did not act as such. A huge hawk, like a goshawk, soaring above. And a crow like bird size of raven with red and yellow beak. All the birds seem to have larger than usual wings.

And riding a gradual uphill about 10 Kilometers from end the usual dog laying beside the road. Seems a dog every kilometer or so and all appear to tired to barely look around, but this one just as I passed decided might be worth a try, and he took off. I had a head start so thought I could outrun him. Then his buddy from house 50 meters off other side of road decided to join in. I topped out at 38 kilometer an hour and thought they would quit, but they stuck with me for 1/2 a K before calling it off. One on each side. And I was pooped. Next move would have been slam on brakes and just stop. Everyone here agrees that is best: give them nothing to chase.

Watching folks was great along the way. Out of Cusco the corn is about a foot high and folks were out weeding. As we approached the pass they were just planting potatoes. All by hand with plowing either by hand or draft cows.

At one of the toll booths stopped by guard who wanted to congratulate me. At least I think that was the conversation. He only spoke Spanish hence a bit of confusion, but fun anyway. Bikes go through the toll for free. We are riding the main highway of Peru from north to south, although I think there is a main highway on coast too. Traffic much less near pass but still one must be cautious.

The people have been very pleasant and kids coming out to high five and slap hands going by. Makes me feel like I am part of something. Brought tears to my eyes when I think of this. But then I get tears when I see anyone pushing the limits and doing their best, no matter what; racing dogs, skiing, climbing, or raising kids.

And a great dinner of beef stroganoff, with a pudding like desert with bananas and something else in it. I had two helpings of dinner and desert. Now 7 pm and everyone in tents for another early start tomorrow. Very pleasant in tent. As Rob says camping is much nicer than hotels as every night is the same home. Hotels are different each time and you never know what to expect. Camp is consistent and mine very comfortable everything in its place.

And beautiful now as up to pee for before bed. Tents scattered about most with a light on, I suspect doing much as I am, recollecting the day and listening to it rain.

Up at 5:30 so as get to Puno early, so those that want to can go visit the floating islands. Left camp at 7:15 arriving at lunch truck just shy of Juliaca by 9:30; 60 kilometer of flat riding. We were told to ride in groups as Juliaca can be a rough town. Apparently from the tour to Puno nearly three weeks ago with Jeanne they said Juliaca was only established about 1985 and is mostly immigrants from Bolivia. I remember it for the 15000 foot runway. Going through on a bus was one thing, riding bicycles is totally different. I half expected a gun fight to emerge in the streets. Then through the center of town with Marius, his wife Hannie, Brigit (all from Holland) and I all agreeing traffic was like Delhi and India. Except no elephants or camels, but there were sheep, pedicabs, 3 wheel bicycle carts, taxis, trucks, buses, minivans, pedestrians and us vying for the same small space. Wild! Have to watch the usual road conditions but 360 degrees around you as things come from any direction and rapidly. We were glad to make it through.

Other than Juliaca and the city of Puno the riding today was great. Flat (except last 8 kilometers with a 435 meter climb) but reminds me of why I like touring. You see the horizon and you just keep going to yet another horizon. You see hills in the distance and then you cross them and the next horizon emerges. I love it. Some did not like the flats but alas. And I realized my fear of starting in Cusco with the others having ridden for six weeks was a realistic fear. But the mountains wore them down. They are tired having ridden an average of 120 kilometers a day over rough terrain and climbs nearly every day of 1000 to 2500 meters. All are tired. At first I was very jealous of missing the ride from Quito to Cusco, but now not so sure. One cannot fail to underestimate the effects of altitude on us low landers.

And discussing living here, Hannie described it as bleak. Very few trees, and growing things is difficult. And it is dirty with trash. So much different than seeing from the bus. From the bicycle one gets the feel of the hills and altitude, the cold, and the existence of the locals. Very interesting I find. 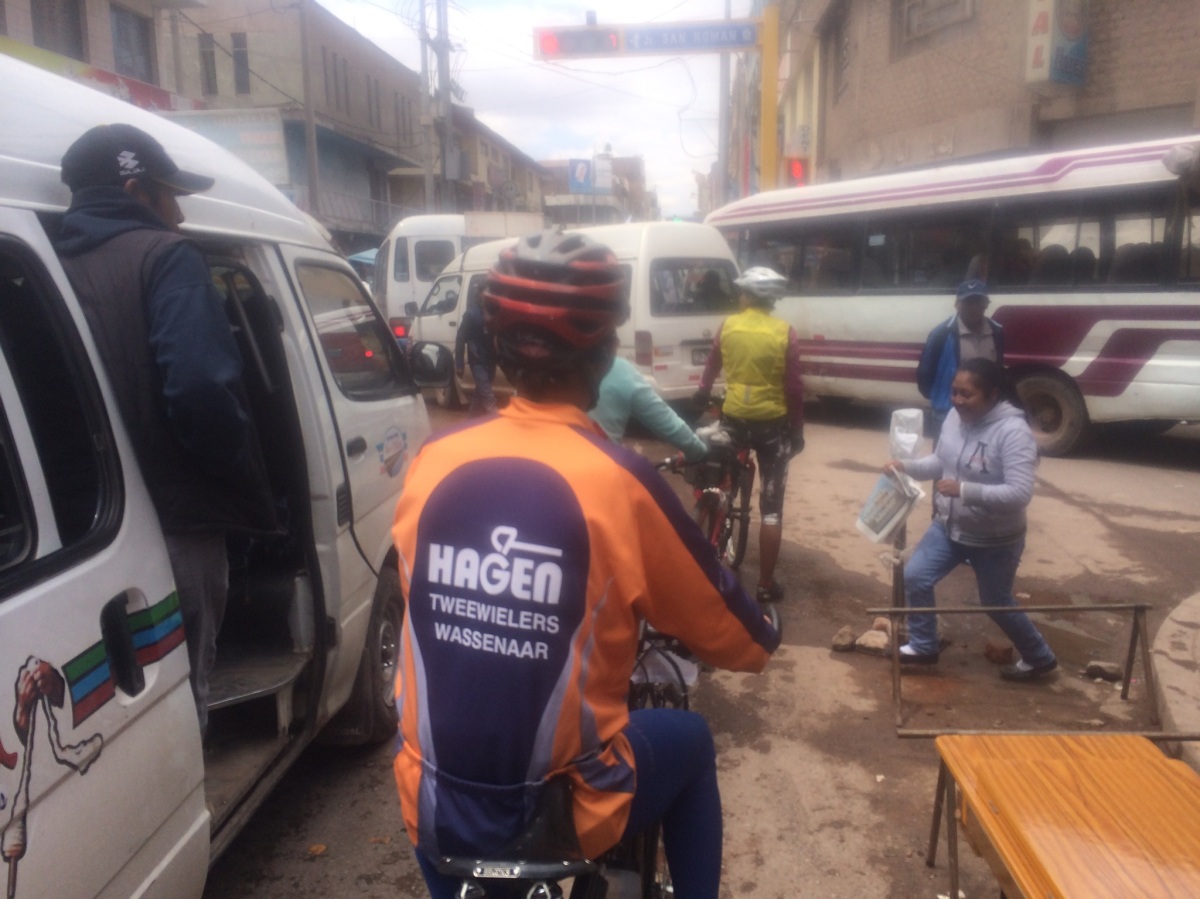 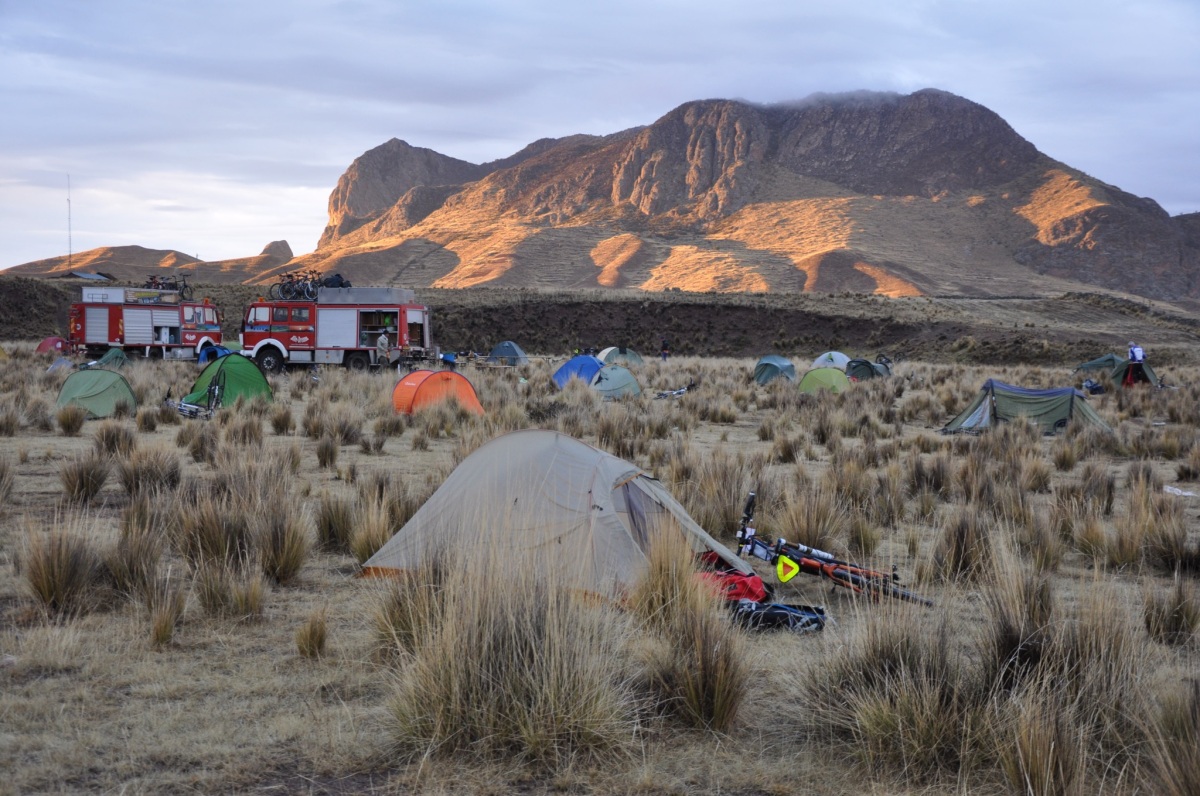 Am finding internet connection frustrating and this is not receiving the editing it should. But I should be enjoying the trip not playing with technology. Hope you are enjoying it. I am.