The Bike-Dreams folks arrived past Tuesday afternoon, today being Friday, and all were exhausted. They had had a rough past few days. Looked like I feel after pushing hard in a race. All they wanted was to wash the mud off from three days riding and camping, communicate with the world outside, and have a three day rest.

Well 40 people quickly overloaded all systems. Water shut down in the entire area, hence not only no hot water but no cold water either. Not just the hotel here (Carlos V) but several nearby hostels. A few people went looking elsewhere for alternate habitations. For me not much of problem all though I had to remember not to flush the toilet as it would not refill. (I had a bit of diarrhea, my roommate Buck waiting in the hallway saying I smelled like a barnyard). Water returned that evening.

The previously very slow internet was quickly a very sporadic affair with everyone catching up on emails, blogs, texts, phone calls and the necessities of modern life. At home am used to 15 GByte downloads and 10 GByte uploads, whereas here under best of circumstance 8 Megabit upload and 0.8 Mb download. And when all connected with a minimum of two devices (phone, tablet, computers), well I
shall say it became unreliable. Apparently Max as a hobby comes in and straightens out the wireless mess in the hotels helping it along. He cannot improve the hardware speed, but can clean it up a bit, making it work better.

Folks are definitely nice people. Languages flowing, Dutch, German, English, Spanish, French, and I suspect others I did not recognize or hear. All outgoing and welcoming. But tired and they were on a mission to get themselves and clothes clean.

The laundromats here are numerous and advertise 2 or 4 hours, but I have not understood the 2 or 4 format. I think what it means is 2 and 4 together means 24 hours, although sometimes it can mean the same day if brought in early. But the important part is clothes come back clean and folded, costing 4 sols (about $1.20) per kilo.

Most folks left for two days to sacred valley and Machu Picchu. Jeanne and I had done that tour last week, hence I did not repeat. I had two days here pretty much alone to wander about Cusco. But I have been wandering about Cusco for two weeks now and for me getting anxious to ride. Did a nice ride up in hills to town of Q’ orea. The spent time sitting in park thinking of the memory of Joe Molitor. His funeral was Tuesday and Wednesday.

Picked up laundry for folks gone on the two day tour, and created little errands for myself. Yesterday went to find a new rear bike light as one I brought does not work. The shops here seem to consolidate a particular type of shop in same area. Printers, office supply, etc., discos are in the area where our hotel is. Found the bike shop in area of chain saw shops. Turns out it was a great shop with a full variety of parts. Had my choice of four different lights.

Helped Lucho (the mechanic) with bike repairs. He is Peruvian and was once the national champion of Peru on bicycles. He lives on the coast which the group visited earlier in trip. I guess he threw quite a party, when they stayed at his village. He is famous for opening his house and helping bicycle riders. His English is very limited so was interesting helping and learning from him. My Spanish leaves a lot to be desired. He rebuilt a couple of bikes including wheels which the hubs were done for. Brakes, cleaning, tires changed, derailleurs adjusted, new cables as needed, the list potential repairs goes on and on. And a variety of bikes including some 27.5 and 29 inch. Had been advised against those due to availability of parts. Apparently the 29 inch tires were available in past weeks but the tubes were exceedingly difficult to find. Interesting to see the number of bikes and kinds, full touring, cross, front fork type suspension or not, handlebars, disk or caliper brakes. Full variety. Folks are changing tires because leaving the big mountains and gravel mud for more developed highways, at least for a while.

Again I have not met a bike which could not teach me something new, and the same goes for a mechanic. Very interesting watching and helping Lucho work. Even changing tires I learned new different techniques for setting a difficult bead. (Involves a door). Always something to learn no matter how basic.

Dinner with Max at a Polloria out of the tourist area. Choices were 1/8, 1/4, 1/2 or a full roasted chicken with potatoes. (French fries). About $3.00 for a 1/4 chicken with lemonade. And more perspectives from another person on “the ride”. Everyone has their viewpoint, especially the race part. I will have to decide for myself.

Officially this is a stage race. 107 stages with me joining in at stage 39. Turns out only about 10 folks are really “racing” with only 1 “James”really going for it. The numbers of people racing vary. Remainder not really racing, but still I suspect faster than me. Steve Aberle said in a comment recently to remember the reason we ski raced. “To make the others look good!” Somebody has to do it.

The sag wagon is available for a ride but one must decide prior when to taking the truck, morning or afternoon. Ride in morn, then get out at lunch and bike, or bike in morning and get in truck for afternoon. Important thing is finish by about 4 as dark at 5:30-6 and sunrise same. Tomorrow’s ride is 122 kilometers with 1086 meters of elevation gain, and day after is 159 K.

Breakie this morn, actually twice, once at our hotel of the usual rolls, jam, butter, coffee and fresh juice. Then off to a proper breakfast (as we Americans like) with eggs, bacon and the previous breakfast ingredients repeated. I understand the food on this ride is like our first continental type with the addition of muesli. Then all were off in varying directions; James for bike parts, Michelle and Liz to explore Saqsaywaman, another good Inca site just up the hill from hotel which Jeanne and I visited on one of our first days here, Rein to hospital for his second rabies injection from dog bite earlier in trip. ( Two thus far to hospital on this trip).

And as Buck says amazing how fast the time goes. I am enjoying the downtime, although I do not really need it now, but the next months are going to be full and tiring. Talked with Michelle who is also staying in Ushuaia at end for a few days. She says she feels she will want to just sit and do little in the days after this ride. My thoughts also, but also thought I will not be getting to Ushuaia very often, so best see it while I can. Hence I am staying 4 days longer than necessary. Michelle is heading for a 12 day tour in Antarctica. She went to Galapagos prior to start filly utilizing vacation. Me, I will be headed for Christmas in Dallas. 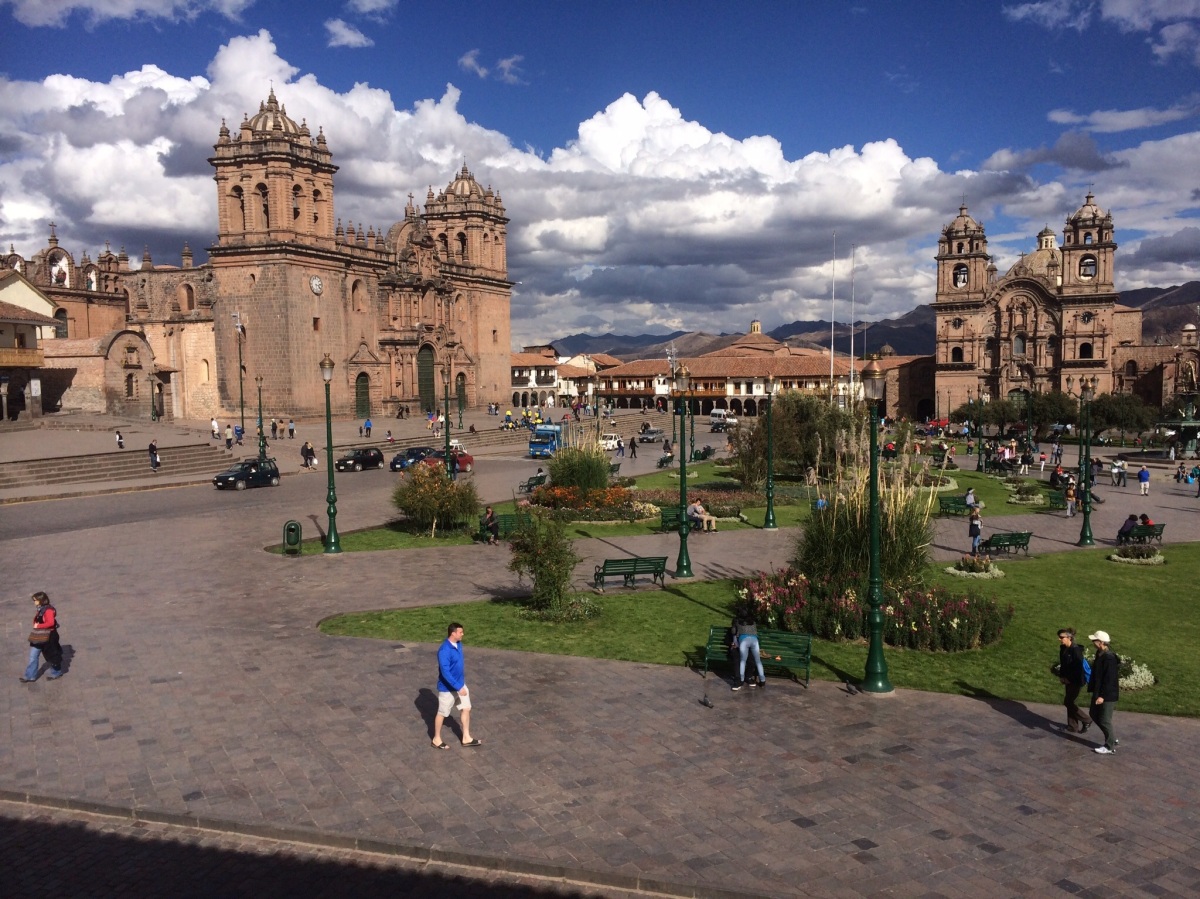 Thus tomorrow my riding begins. We have two what they call bush camps then two nights of hotel before reaching Copacabana, Bolivia and our next rest day. Bush camps are just us camping, as opposed to an official campground. Looking forward to it. Concerning this blog I will try and write keeping up, and posting as Internet allows.

One thought on “More Cusco”