Has been a great first day in Washington D.C., but we arrived last pm. Found a restaurant about 6 blocks away but proved great with a waiter who filled us with lots of local info. The walk home and unlocking the apartment I dropped the keys., when trying to unlock inner door. Did not hear them hit, but knew they fell. We could not find them in the dark but hooray for cell phone flashlights, which also refused to show the keys. Then we noticed the cover off the 3″ storm drain. At first did not see them but it was water about 2 feet down. Then I saw the green nylon cord they were on.

Suffice it to say it was a bit of a worry. Took us an hour an half to finally retrieve them. Difficulty finding a stick but then it just pushed whatever down further and I knew there was a drain somewhere down there. The owner was in Philadelphia and could not help. Jeanne went in search of a coat hanger and after 25 minutes returned having paid $20 to 4 month pregnant homeless lady to help find one. Still no luck, and now Jeanne called a locksmith but as he was explaining the difficulties the coat hanger managed to return the keys. An hour a a half.

On to today though and started a Washington D. C. Walking tour of the monuments and memorials. I thought of my friend Zak who said everyone should visit there nations capital at least once. The history of the United States is amazing and it shows. I was impressed by the history of l,enfante who designed the mall at the direction of George Washington. He wanted a large space which over time one could show the monuments to our history. Wow. Impressive. The Washington monument is impressive from every angle and lighting. When built it was the tallest building in the world 550 feet. It is closed now for repairs of the elevators, but outside was blocked off, perhaps making a memorial of where I threw up in 1965.

Then the World War II memorial and on to Vietnam memorial. I never went to Vietnam but it had a huge affect on me, and the memorial brought me to tears. I tried to remember the names of the people I knew who were lost there, but my memory failed me.

There were two things which struck me today, the number of people who were willing to give their lives for their beliefs, throughout history, and the eloquence of some of our leaders.

We moved on and diverged for the self guided tour and walking to Arlington cemetery viewing the women’s war memorial and Kennedy gravesite.

Lincoln memorial not only with his statue but the Gettysburg address and his second inaugural address engraved on the side walls. Very powerful

As a newspaper reported recorded several years after Lincoln’s death:

“Washington taught the world to know us

Lincoln taught us to know ourselves”

Then to World War I and Martin Luther king jr. 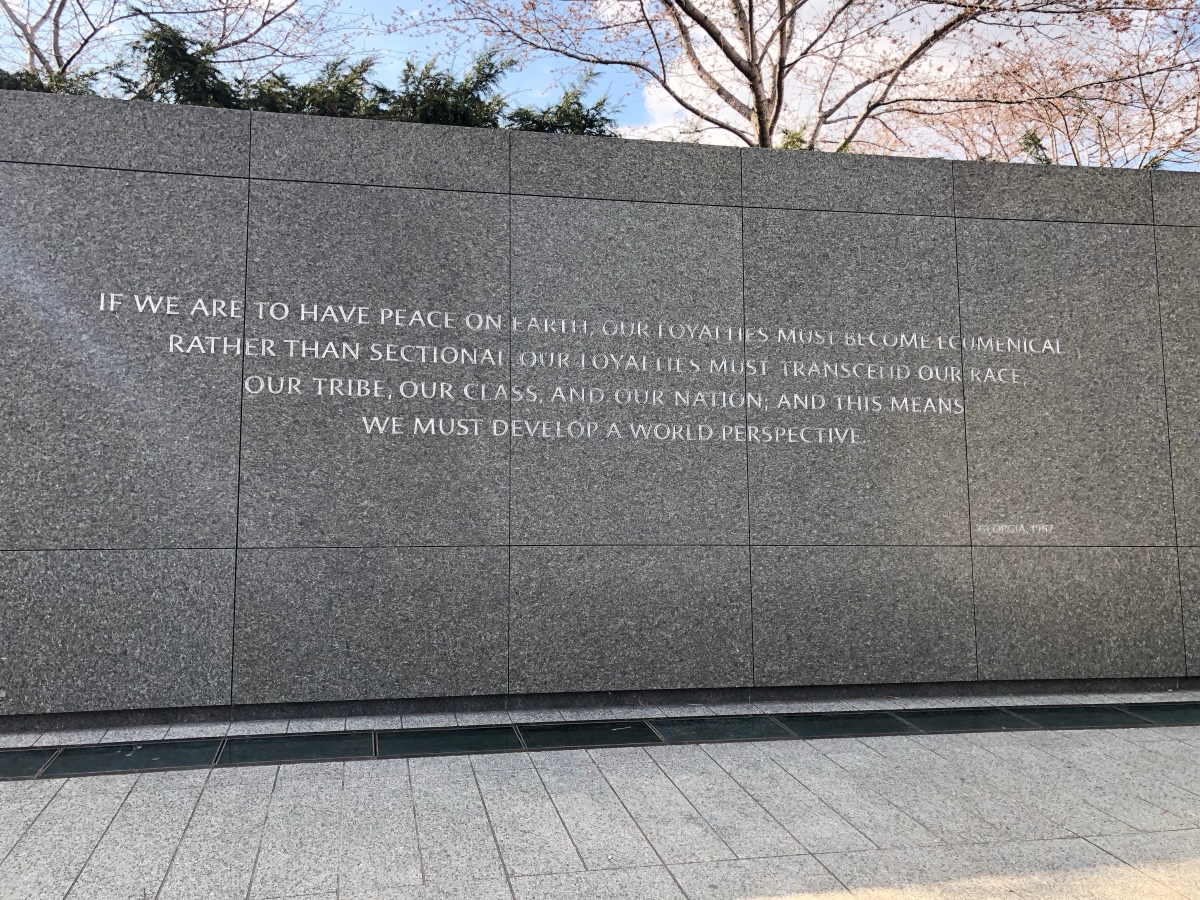 Then franklin Roosevelt and it was not the tiny little memorial but had been moved to cover 6 acres. There was the small memorial but much more covering his 4terms in office and how he raised the standards and pulled us through another world war.

Jefferson was the final visit of the day and it capped the wonders of the day taking us back to the writing of the Declaration of Independence.

now we were hungry, breakfast having worn off hours ago. We agreed to head home and try and find a restaurant along the way. Several restaurants, all closed. Finally found a Korean restaurant near home. Someone told us this is a business town and restaurants here do not cater to tourists. Not sure where they eat.

And we looked for my bike path I rode in on over 50years ago but could not find anything resembling my memory. If it was there it is a highway now.

2 thoughts on “Monuments and Memorials”