Great ride out of Seeley Lake although the climb seemed hot, although temp only 72 F (21 C) must be quite humid.  Colleen had departed as planned about 6 am and returned to Boulder, Colorado and back to work as a real estate agent there.  After about 10 miles Jeanne gave up unable to keep the sweat off her glasses.  We all have bad days and she was having one, for whatever reason, and returned to town.  Was able to get ahold of James and Warren via cell phone text, when she approached town.

Dave, Constance, Nancy and I continued on,reaching the high point shortly later and had a great ride through the forest.  A nice road.  Warren and Jeanne met us a few miles before the community of Ovando (population 50 and over a hundred dogs).  Joe and I had come across the bar there ,”the stray bullet” and had a delightful lunch and nap, with Joe falling asleep on the railing in front.  I repeated the picture of Joe substituting myself, and we had some great sandwiches, and beer.  Highly recomended.


A ride on, missing the exact turn Joe and I missed returning as Joe and I did after 1/2 mile down wrong road. Then across main highway and a wonderful ride across the ranch lands of the Blackfoot valley. Met James biking towards us. He,Warren and Jeanne had separately visited the big Nelson campground and deemed it unworthy of us. The had proceeded on the route about a mile further and taken the 100 yard side road to a hiking trailhead. Where we eventually stayed. Nancy was thrilled as it had an outhouse. Small conveniences.

Today we four climbed huckleberry pass and descended a through a gorgeous forest of Douglas fir.  I was amazed I could not remember this area at all remembering it as another memory.  Different trip.  James, Warren, and Jeanne met us about 5 miles before Lincoln.  We held a bit of meeting in front of post office deciding where and how far to go. It was still early, about noon. Folks were concerned about 50 miles and three passes to Helena, our next planned layover day.  Joe and I did it in one day but ?

I encouraged us to go where Joe and I had camped at poorman creek reading from my book it was the third best camp we had had.  I did remember the large number of private properties with no trespassing signs all along the route through the forest.  We decided to go for that keeping in mind the inaccessabilities of the van and truck.  11 miles later we made the turnoff for poorman creek and the vehicles were waiting at the junction.  They had driven the tiny road and turned around about a mile up the road in only place available amongst the private residences and no trespassing signs.  From looking at the map it seemed to me they were just short of where the camp was.  There was a no trespassing sign on the right but the left side looked open and flat, and we decided to stay there.  It might be possible for the vehicles to continue up the main road to stedman pass and rejoin our steeper and rougher route in 5-6 miles.  Or drive way around to Helena and return backwards to meet us.  And a mile farther was not going to make much difference to us riders, so we sat on the bridge and had a beer.

A couple on motorcycles came by and stopped.  They were from Seattle, had been out two weeks thus far and riding what they could of the great divide and continuing on to South America.  Great talking with others  and their methods of travel.  They were not staying in motels but camping and having a great time. 250cc yamahas outfitted specifically for this trip.

We moved up the open space a few hundred feet and set up camp.  The awning went out and tents dried, as it had rained most of last night and they were put away quite wet.  I confess I missed being at the camp Joe and I occupied when I read we had both taken wonderful bathes and had felt cleaned of the sweat, dirt and grime of the days.  This creek although clean just did not have the topography to bath.  But the gin and tonics came out and pleasant conversation ensued.  Then after about half hour a strange man appeared to say we were camped on private property.  I suspect he thought us partying hard, but discovered a bunch of “old farts” and said we could stay the night.  He explained this whole area was developed from placer mining hence the private property and his place had a water plant generating 300 watts of power.  Later James and I walked up the steam a bit and found the intake.  A 4 inch pipe with slits allowing water to then run down the 50’foot estimated height to generate his power.

Another gourmet meal and all tired retired to tents about 7 pm.

Day 3 out of Seeley Lake

Good night although intermittent rain again, but stopped by the time to wake up.  We wake up to the door of the sprinter van sliding open as James prepares water for coffee.  Walking about, the grass was wet but generally a nice morn.

Departed at 8:20 although a bit chilly.  Totally missed the camp Joe and I stayed at.  Good thing we did not go looking for it.  Was looking forward to seeing it again.

Reached the top in an hour and half where van and truck were waiting with James, Jeanne, and Warren. They had hot drinks for us and a cheering section for the last 15% slope.  They had driven around to accompany us today.

A CDT ( continental divide trail,  a hike rather than GDMBT which is biking) hiker came along enroute to Lincoln today, another 16 miles. He does 35-45 miles a day and must return to Minnesota by 20 September for work.  Trying to get to banff before that.  Says someone took over from Sam in Hachita New Mexico, delivering water.  The biker who we met the other day who had hiked it, say Sam died a few years ago.  He was a wonderful person and had been incredibly helpful with Joe and I.

Short break and we went quickly passing the vehicles on the rough downhill.  Discovered the memory I had yesterday coming off of huckleberry was actually of today.  Dropped down through a forest onto to ranchland valley.  Grady ranch.  Then up to the second climb of day, which proved somewhat rough,, again walking a significant portion.  The vehicles were going to wait for us and meet at top, where we could all have lunch together.  Hoping to get to Helena for a rest day. The map said 9 miles to the top and the climb started 4 miles from top and the second continental divide of the day.  But the climbing started soon after leaving the valley, 9 miles before the top.


Reached the top (actually only a meadow where trail splits) about 2 p’clock.  Map said turn right but there was a private drive sign there so continued on for 100 feet where a ranger was driving about.  My GPS said I had passed the turn.  Constance came up but Dave was not to be seen.  He always waited at intersections when he was ahead, and I had last seen him just a few hundred yards ahead of me.

Nancy arrived and we went down the road which quickly split into two.  The map said go left on the unsigned road to dog something and not Ophir and hope.  But there were no signs.  And no bike tracks.  We were pondering if Dave had gone up the road more, as it was a bit difficult to determine.  Constance, nancy and I proceeded down the left road which was steep but seemed correct and on the gps.  Quickly though after no bike tracks we stopped.  Nancy stayed there while Constance and I pushed bikes back up to the meadow. I remained there while Constance road up the road to check for Dave.  After a few minutes James and Warren came riding up the road where we had left nancy.  They had not seen Dave.  Constance returned and we pondered.  Three choices of road with numerous further choices on each of them.  Dave did not have a map. It was complicated.

Warren road his bike down to where vehicles were a short distance from where we left nancy.  He came back with truck and drove up the road where cell service was available at top and a message from Dave saying he was at top and numerous roads but do not know which one we were on.  But that was a while ago.   Getting complicated and we all came up with ideas on how to get back together with Dave.  I stayed at the meadow where wind was blowing and cold, Warren would drive a loop up to near top and come out near where vehicles were while James and Constance roads bikes down to sprinter.

I was eating what food I had left and putting on all my clothes, when warren returned in truck saying he had message from Dave saying he was other side of marysville (10 miles off route)  and would meet us in Helena.  He did not realize the distance it was for us (another pass, and 25 miles).  Thus Warren and I decided he would take truck and go recover Dave, bringing him back to our camp which we would find just below where Vehicles were now.

Found a superb site. Off the road on a side road and pulled in, marking the site for Warren and Dave with stick arrows and a chair.

Made it to Helena and exact motel Joe and I stayed at and same room with porch.  This time we have the whole house, 4 bedrooms 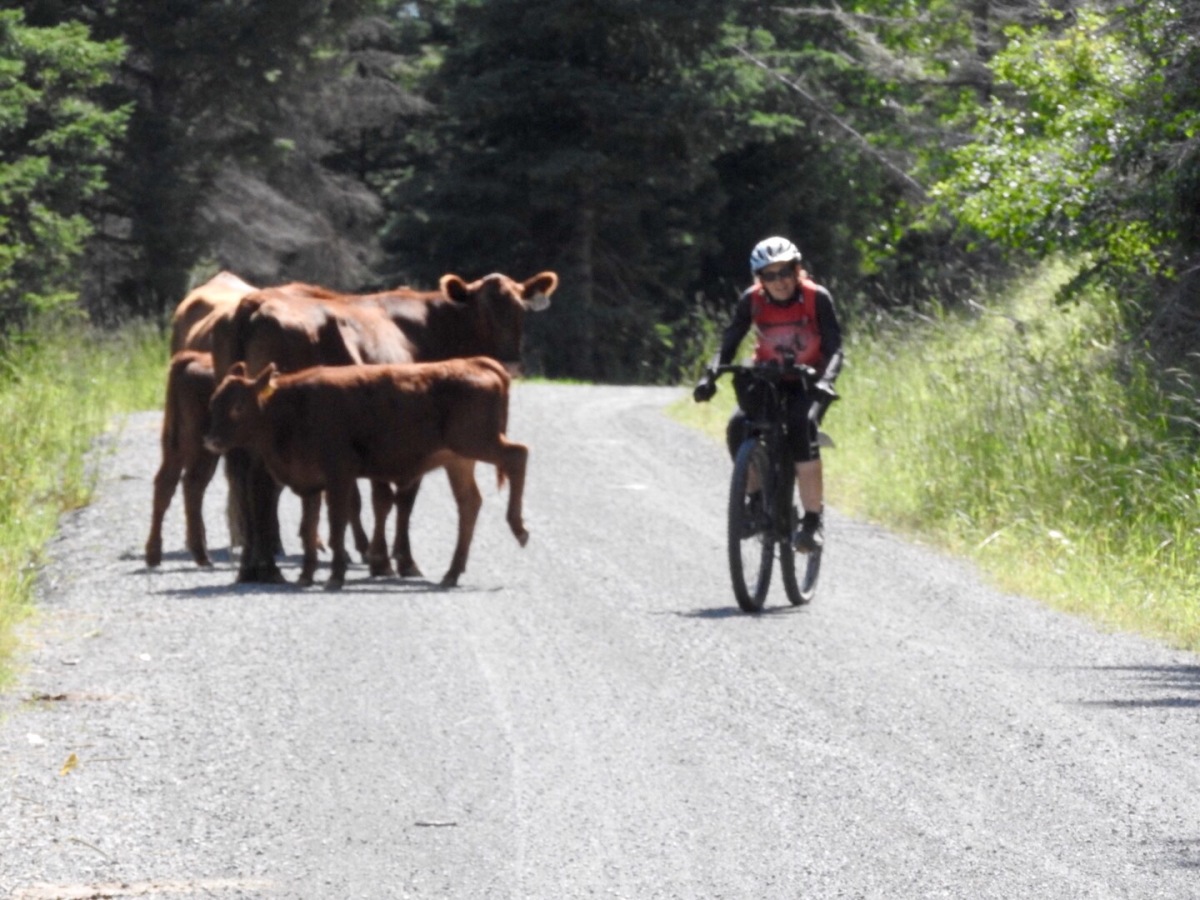