First a correction,  thanks for those who helped with my misunderstandings.  Apparently there is not a 8%religious tax but for those who choose 8% of their income tax goes toward their church of choice.  Slightly different than I stated.

I am interested in the religious aspects, but have realized Germany is different than the U. S.  Imagine that.  Not better not worse – different.  I myself wonder about the time and money spent on churches and religion, but have come to realize this is a magnificent place because of it.  The numerous cathedrals in nearly every town, village and city are truly magnificent

Sort of like in South America when I was complaining to Buck one day about the dogs.  Buck corrected me in saying it was the culture and often there is a reason for it, even if you do not understand.

Once again the diversity of ideas makes things wonderful. I do not play hockey but believe having hockey rinks in anchorage makes it a better place.  Many people in the U. S.  think space explorations is a waste, but I believe it adds to our human experience and enriches all our lives.

We met Britta who had taken the morning train from home near Köln to ride with us for a few days.  Jeanne and I have been together basically just the two of us for several days and once again we began to unload stories on her.  Had to have a coffee at train station in Mainz as too excited to start riding immediately.

Finally began working our way back to the delightful river promenade and back on the trail.  Just nice riding although not really beside the river.  Near Bingen came across some old bridge works with an explanation of the bridge was destroyed in January of 1945.  Somehow that struck me.  Guess they were looking to finalize the war and having destroyed nearly everything else of any military value were beginning to destroy things of value to the general population.  Ugh.

In Bingen we had no hotel but the first place we came to the proprietor said we appeared to be capable of the 3rd floor and we got a wonderful room with terrace overlooking the river, carnival, and Main Street. (Capable of third floor means able to walk up as rarity to have elevator)

We went for a most delightful meal at a nearby restaurant and headed towards the wine festival, but had to stop at the hotel room for a jacket as evening weather cooling off.  Well we made it to our terrace and spent the next 2 hours there just watching, talking, and enjoying life.  Never made it to the wine festival.

Then we got to ride our bikes from Bingen to Koblenz.  Everyone had told us this was the best part of the ride and it lived up to its reputation. A river went into a valley maybe 200 meters deep (estimate 700 feet) with castles galore.  At the end of the day I asked how many we had seen. I thought dozens and dozens, and Britta said she thought she had a picture of each one, as did I.  I had pictures of 14 but there were many more I realized hidden away. 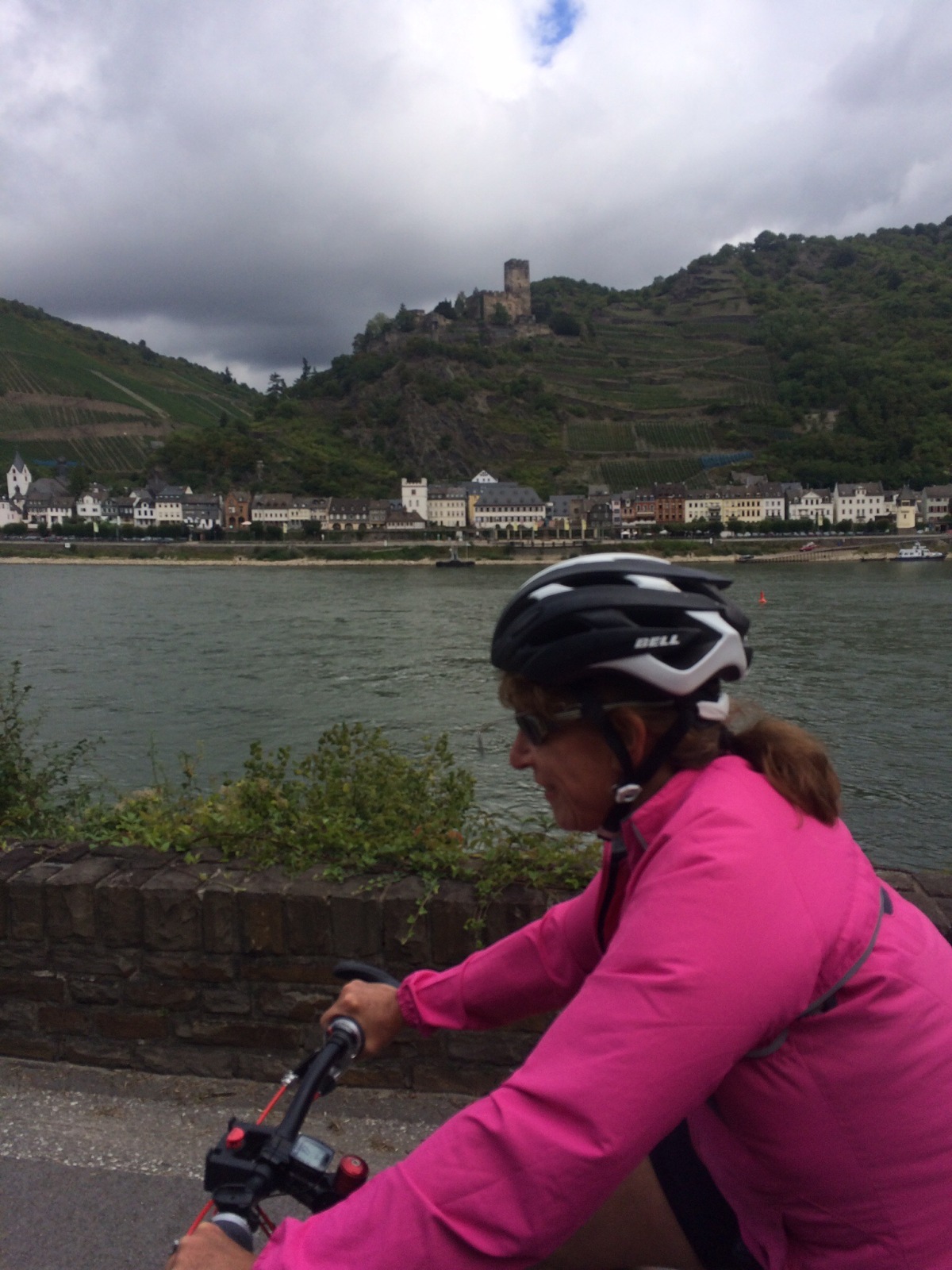 We picked one castle in the village of Bacharach to visit. Delightful town and a short hike up to the castles for coffee and cake.

Then a very short discussion of distance to the Manning residence and we decide to go for it, meeting Todd enroute just before Bonn.  Another great day of riding although I think how come 85 kilometers is a big day for us? Well we stop for our lunch, stop the bakery, (we have adopted the standard of can’t get bread the day before because then it is old), stop for coffee and Radlers and just stop to whatever and enjoy.

And now it is raining and we have decided on a day off.  In 19 days of riding it is our third rest day and first in 14 days.  And in those days we have worn rain coats only for a total of maybe 10 minutes.

Now washing clothes, cleaning, organizing and just enjoying a break.  Riding the bicycle is fun but back to diversity.  Just a bit of change.