Being Negative only makes a difficult journey more difficult.

unknown
What can I say, the title seems to say it all.  Left Basel (actually Weil am Rhein) and worked our way to the euro 15 bike route.  When we booked the hotel we had no idea where in town it was, but turns out it was made to be convenient to all the highway, freeways and intersecting travelers  passing there. A 10 story modern hotel with a Mexican themed restaurant and general clientele which is only stopping for the night and passing through.  And we were some of those people.

When I turned on the GPS we were 126 meters from the cycle path.  (My Garmin 1000 I have loaded with the cycle paths of Europe). And I learned something else about the Garmin.  It had me going back saying wrong way as I had put in bicycle touring as preferred track.  I changed it to mountain biking and it lets us ride on gravel pathways now. Not exactly what I call mountain biking., but I see the reasoning.  But I digress to the technology.

But we immediately saw the route signs and wound our way about a few streets always on the cycle path beside the road.  With 2-3 kilometers we were on the edge of the Rhein.  Actually the dike defying the northern bank of the river.  And basically that is where we have been for two days. 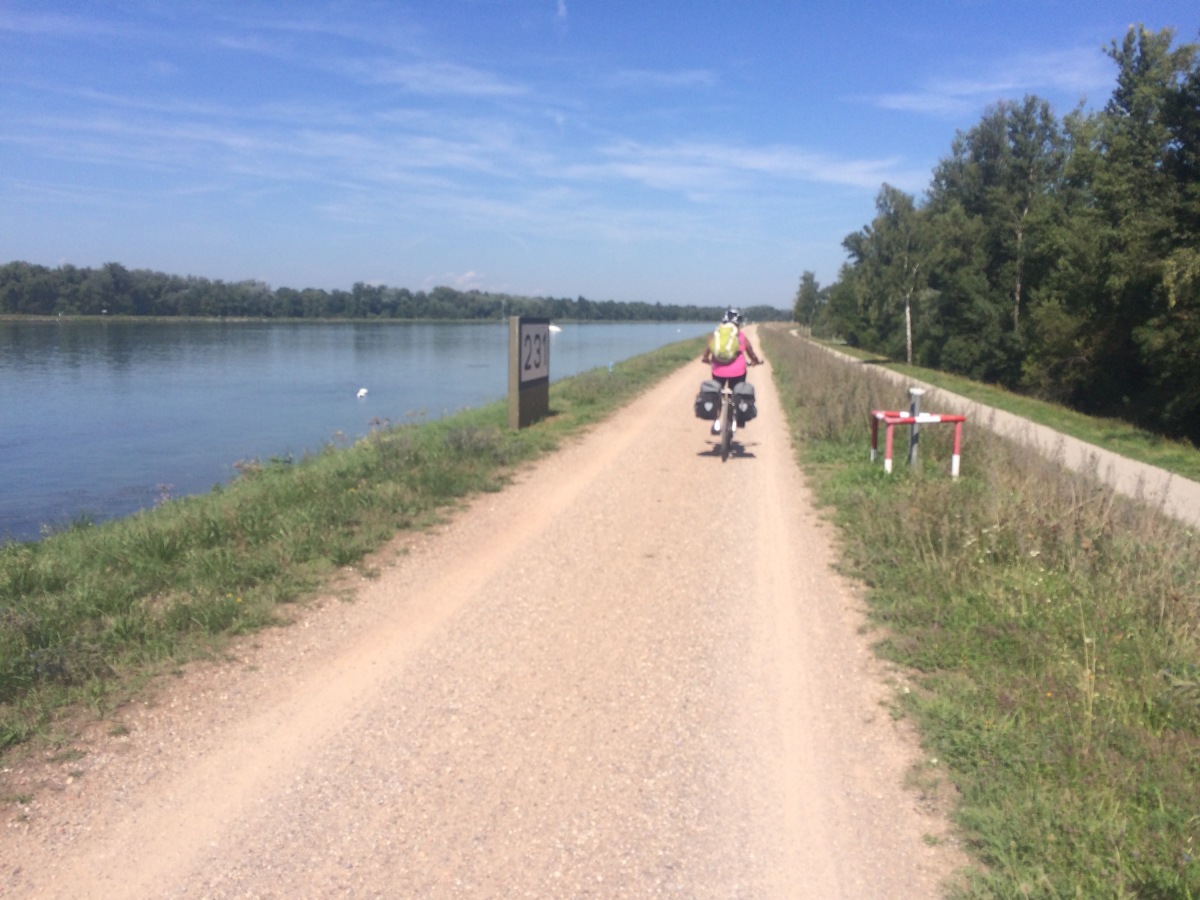 The Rhein River in no way shape or form resembles a free flowing river.  From Chur in Switzerland it is contained with very strict dikes, often two on each side.  And it seems 95% of he time it is a pathway for walking and biking.  The are place along the way where access with a boat can be made or beach areas, and certainly a fair number of sloughs and side channels, which the paths go around.  And frequent benches for sitting and resting.

The are dams and weirs often and the required locks to go with that.  Fun to watch barges going along.  Apparently near Basel there are connecting locks and channels which connect to the Danube which flows to Istanbul, completely connecting Europe.

And as noted earlier the river is clean and clear.  People swimming in it.  Yesterday stopped at a put in and some fellows were building two rafts for a day on the river.  Car tire inner tubes and they were building a wooden platform which held a sunshade.  They were ready for a delightful day. 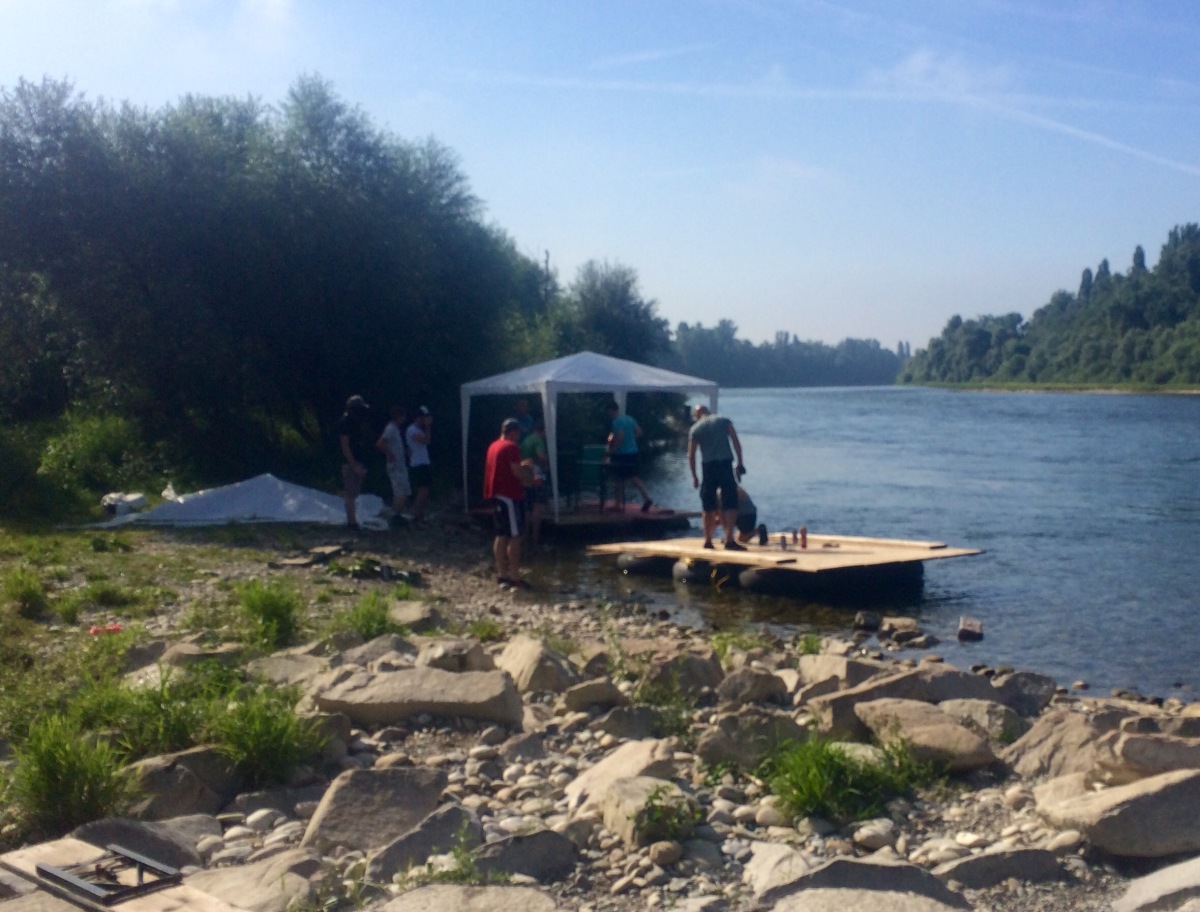 And not only people swimming but hundreds of white swans.

As noted there are numerous slough with weirs. Most with fish ladders for the Atlantic salmon which come here, and I assume is one of the fish we see people fishing for.


Yesterday we did not have reservations but agreed to leave early as breakfast was served at 6 am.  We decided to call it quits when it was 1 or 2 o’clock as the highest heat of the day is from 2-5 pm.  We arrived at Breisach about noon and went into town.  Reminded us of Juneau with boats parked along the river and parked so as the visitors can do what they do in town – eat and shop.  There was a wine festival going on (this is a wine region with lots of vineyards we have been riding through and along) and a carnival but we still had energy and carried on to the village of Sasbach, two kilometers off the Rhein River,where a room was found at the guesthouse.  Walked to the grocery store in preparations for future lunch materials, as next day is Sunday and most stores are closed.

After the walk I laid in room and caught up on reading, as still in the 30s temperature wise (90s Fahrenheit).  Dinner and bed and no internet at hotel so we were with each other.

Today much the same although breakfast not until 8 so we packed and we’re ready to depart immediately after breakfast skipping the last cup of coffee.  Supposed to be hotter today and it was.  On arrival here it was 34 on my Garmin (95 F). And do not forget the humidity.  Sweating is a way of life, and then you do something.

But good riding deciding to stay on the German side of border as more along the river and hopefully a bit of breeze.  (Not much but almost a breeze, the sailboats were moving) our goal was Kehl across the river from Strassborg on the French side.  Bike path the entire way.

With only 3 k to the town center, we were riding through a park and pass a couple who commented on my Alaska jersey.  Seems Alaska is quite the place.  Anyway we talked and told them our story as they seemed interested.  They lived in Kehl but said not much of interest there but yes Strassbourg was interesting.  They came from England and Australia, hence their English was good.

We mentioned looking for a hotel.  He looked on his app “Very last room” and we had reservations 3 kilometers away and apparently walking distance to downtown Strassbourg where this evening we will try and see the lightshow on the cathedral.  Strassborg is apparently a world heritage center although my German does not allow me to know why.  But many have told us it is interesting.  We shall see.

And crossed the first bridge which is pedestrian bike only. Having a beer on entrance to France as once again the heat is stifling and it was 70 kilometers again.

Historically this area along the river has for centuries gone back and forth between Germany and France.  Apparently the bridge was built after the war as a friendship gesture between the countries.

And our hotel is delightful although the current temperature is 95 F and windows and doors open.


And just as I am figuring out German we go into France where my French is non existent alas.