wow friends.  What an amazing thing.

Alfred had asked us to visit his home and perhaps a rest day. We gladly accepted the invitation, and rode the 70 kilometers from Mäder, Austria to Vogt, by way of Bregenz at the east end of Bodensee (Lake Constance).  The city was crowded but still a bike path along the lake although lots of activity which does not allow rapid transit.  A flea market, and the opera set of Turandot by Puccini.  What an amazing set and backdrop by and in the water of the lake. 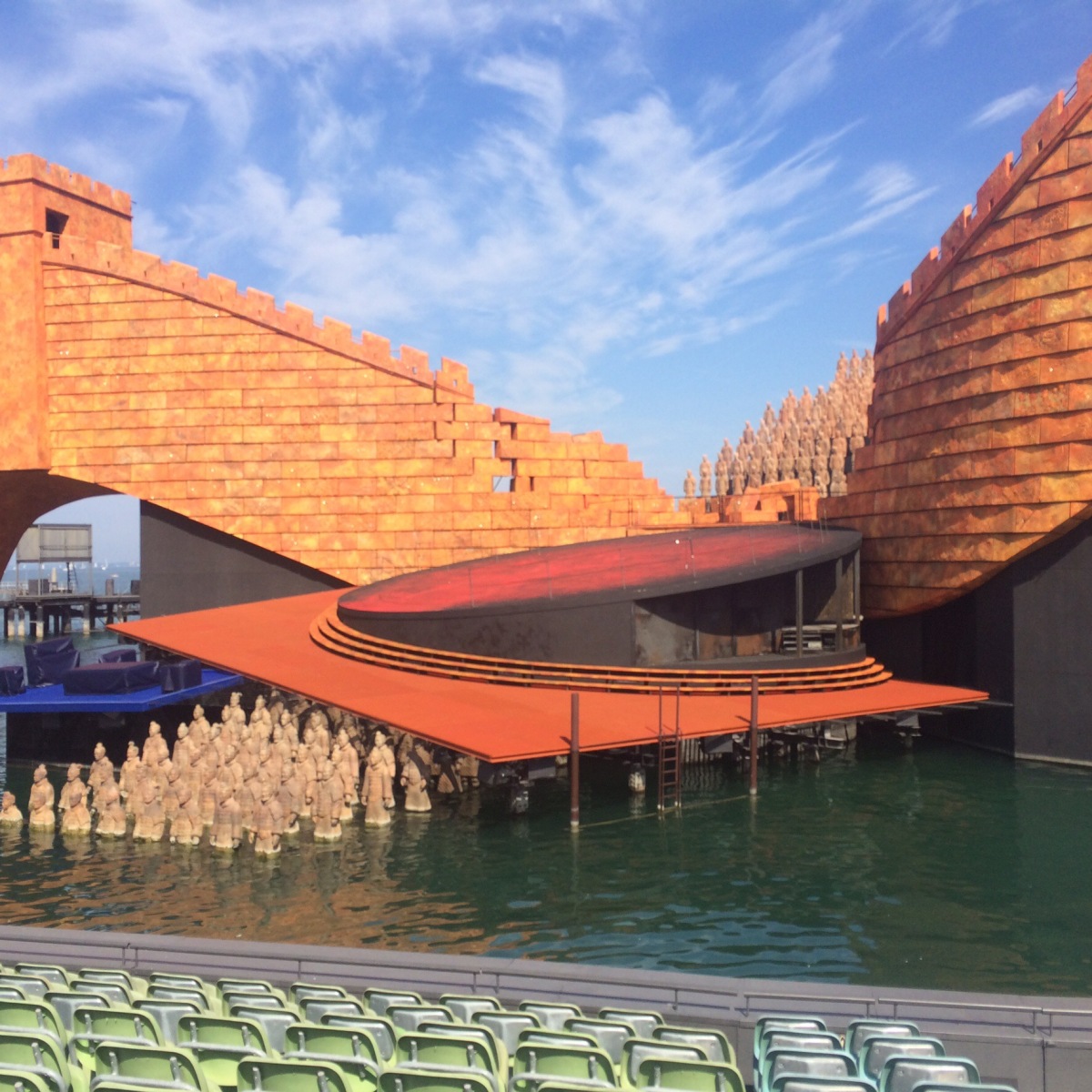 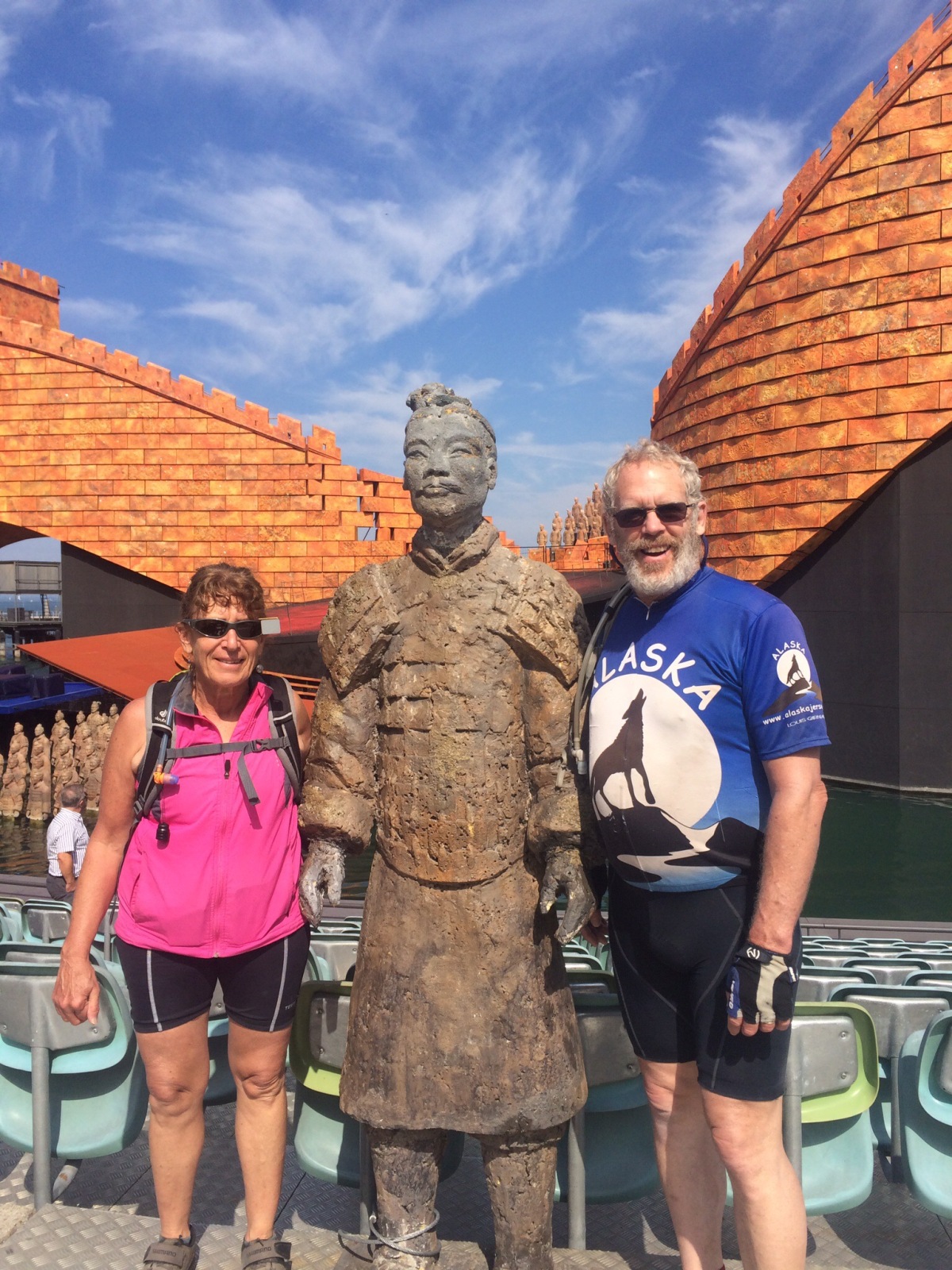 Then on and we are continueing to be amazed at the delightful countryside.  Being Sunday people are out enjoying life, biking, going to the beach and enjoying the sun.  Vogt is at an altitude of 725 meters whereas the Bodensee is at 400 so a bit of a climb but it is all hill country of up and down.  Did a total of 525 meters and again we managed to get tired.  Must have something to do with no riding or exercise all summer. 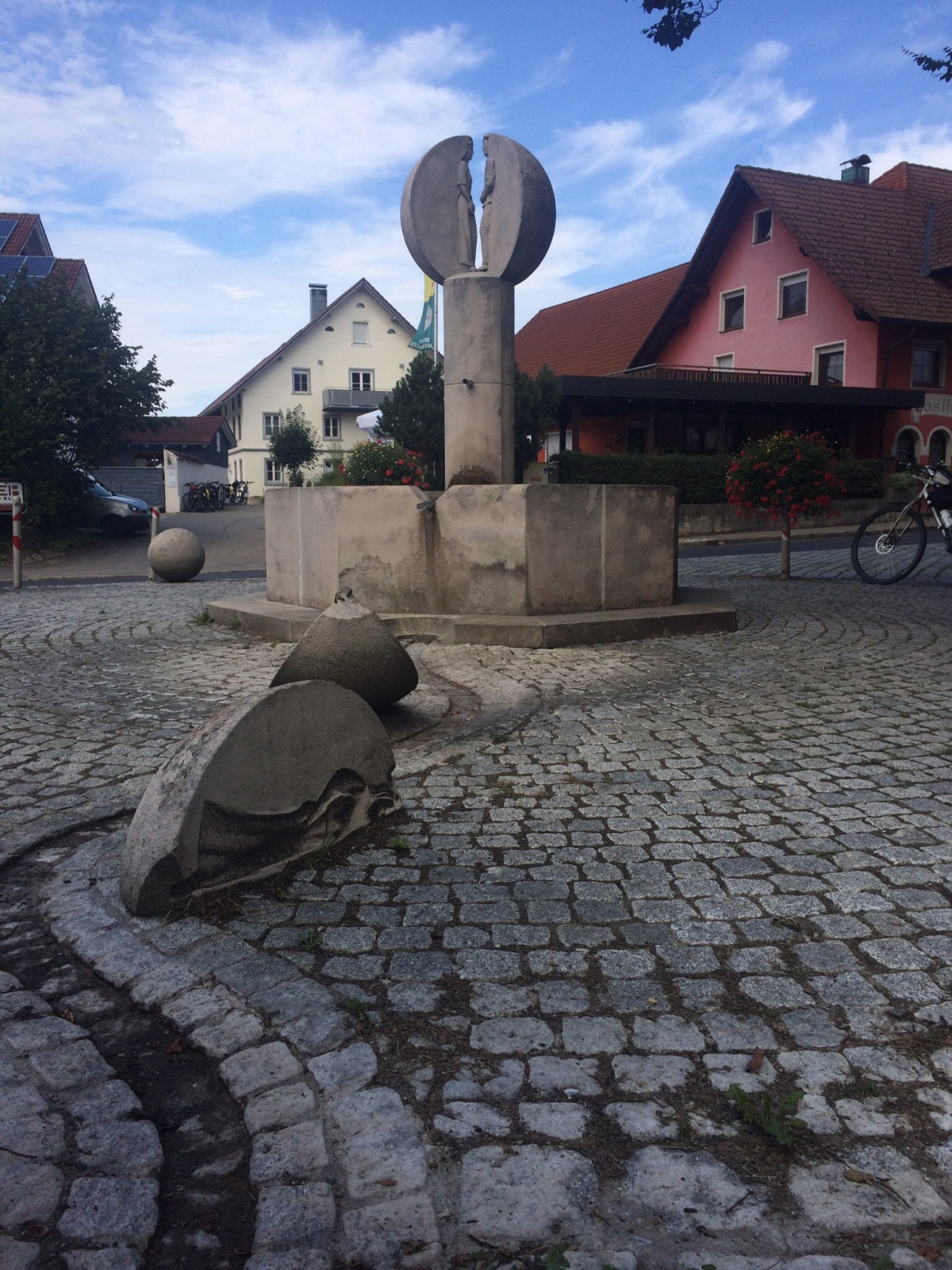 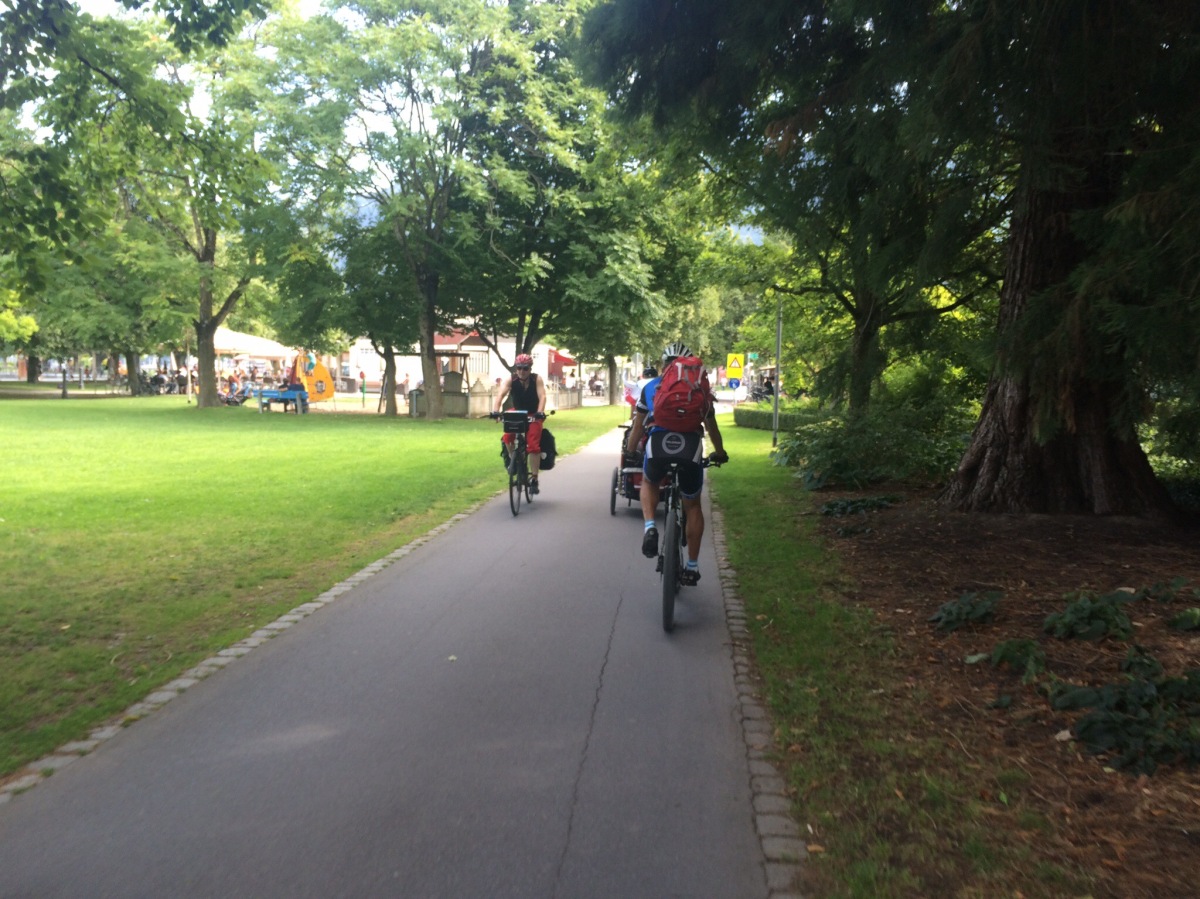 Bridget, Alfred’s wife was waiting fo us and immediately began taking care of us having some Radlers ready and cakes.  She took our laundry and washed it cleaning my jersey like it has never been done, returning all neatly folded. Wow!

That evening we watched each of our movies we had made of our time in South America.  Fascinating to see the differences of slide shows.   Different viewpoints of the same thing, although Alfred did get to start from Quito, thus had photos of the time in Ecuador and northern Peru.

Monday, Alfred, Jeanne and I head to the train station about 15 minutes drive.  2 hours later we are in Munich, to see the city.  As with any city lots to do and not enough time, so we convince Alfred we enjoy just walking about. But first we head to the HofBrau House where Oktoberfest started. Now it is a huge festival the end of September and first of October which people throughout the world celebrate beer.  The restaurant is now a tourist area but delightful. 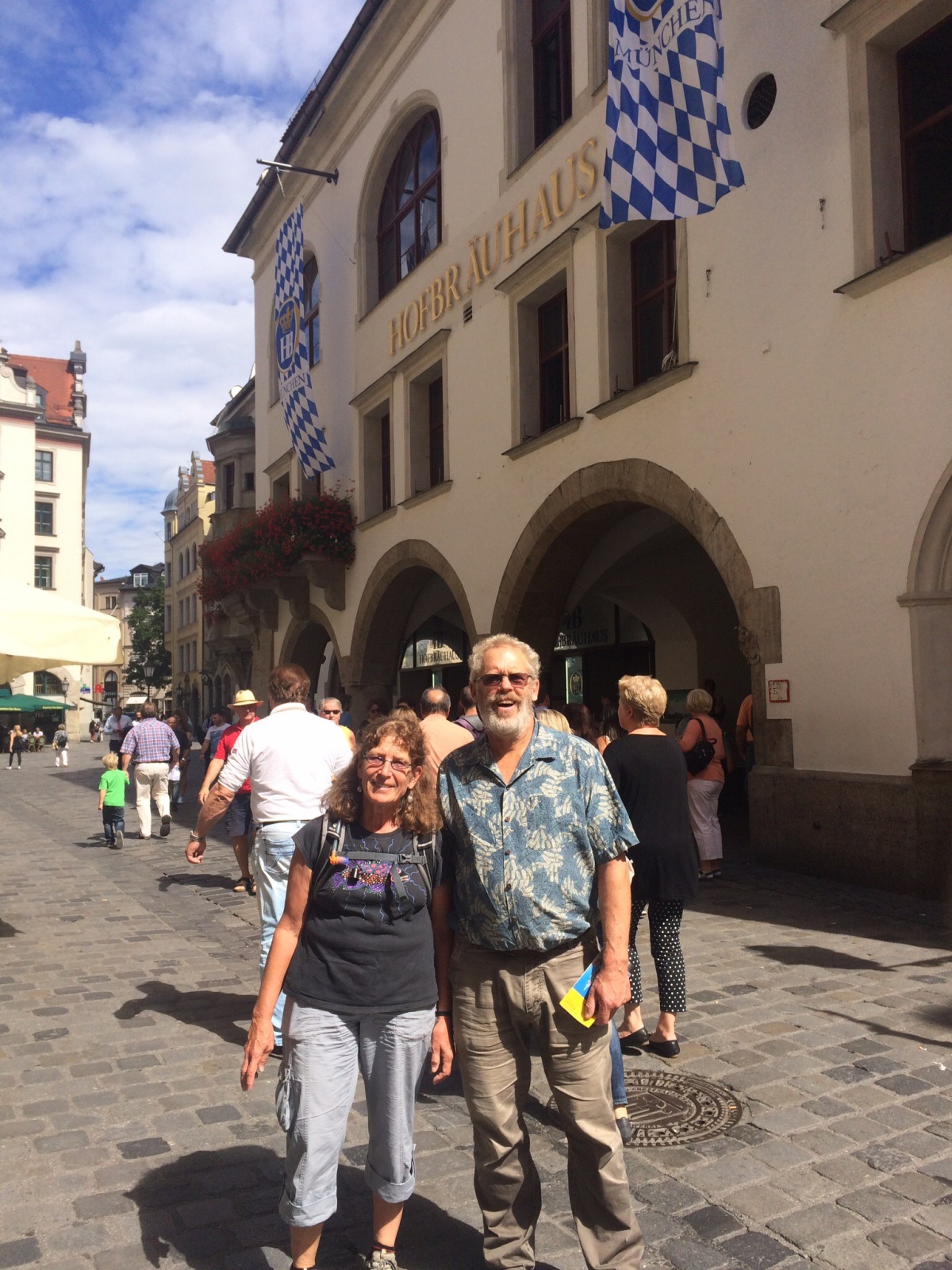 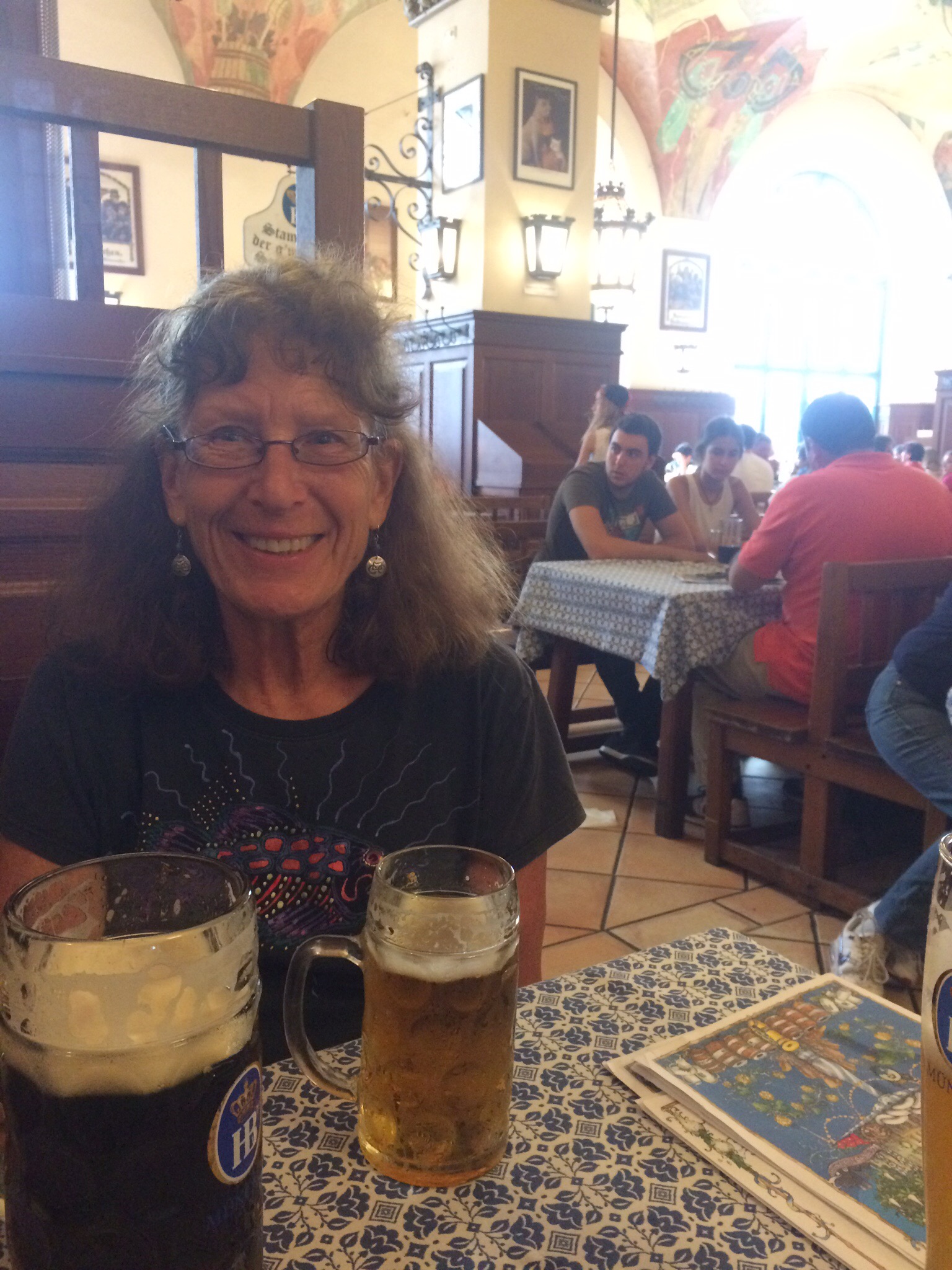 Then off to the German museum which appeared from the outside to be a very good museum and it would have enough nice to see but alas time to return to the train.


The trains continue to amaze me.  3-6 minutes to change and not to worry, even having to go under or over the tracks.

On our return again Bridgit had a wondrous delicious meal of soup, bred and cakes.  Somehow we figured out I like sweets.  Hmmm.  But we ended up staying up late into the night, conversing, mostly about the adventure we had in South America.  Every day was not so incredibly difficult, but when done day after day after day, not only did the physical aspects add up but the mental wearing down.   Some survived it easier than others and some thrived.  For Alfred and I we concluded we thoroughly enjoyed the trip and given all the time in the world would gladly repeat it.  But there are so many other things.  And one cannot repeat the same trip as time,  weather, and people would be different.  And Bridgit and Jeanne state they have a closer understanding of what happened along the way.  They have heard the stories but not in combination with another rider who experienced the same thing.  Jeanne had unfortunately had to go to bed a bit earlier than we, but still states she has a much better understanding, after being with the two of us.  A delightful evening, bringing the memories back alive. 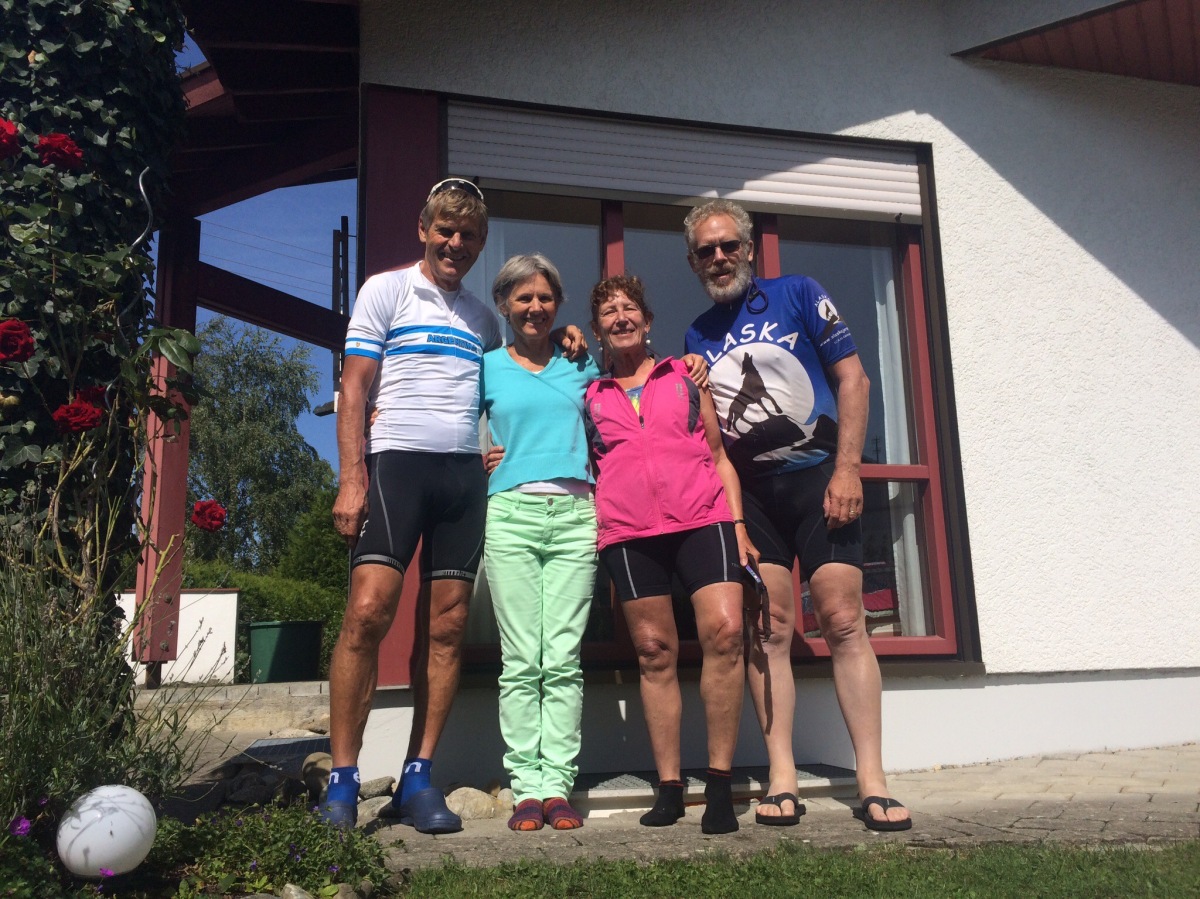 But we must continue.  As delightful and wonderful as the visit was we are on a mission, thus yesterday we return to the bikes. Alfred loaded the GPX tracks from his computer of the Rhein trail onto my GPS and copied his movie for me, the we three rode to Freidrichshafen where we visited the zeppelin museum.  Back along the Bodensee.  A great place describing and showing the history of those incredible airships, including the disaster of the Hindenburg in 1937 at Lakehurst New Jersey.  There is a full size mockup of the Hindenburg passenger area.  Certainly not like air travel of today.  Spacious.

Bridgit had made us a superb lunch and we sat along the waterfront, dreading the departure.  We did not want to leave.  But alas it was time. 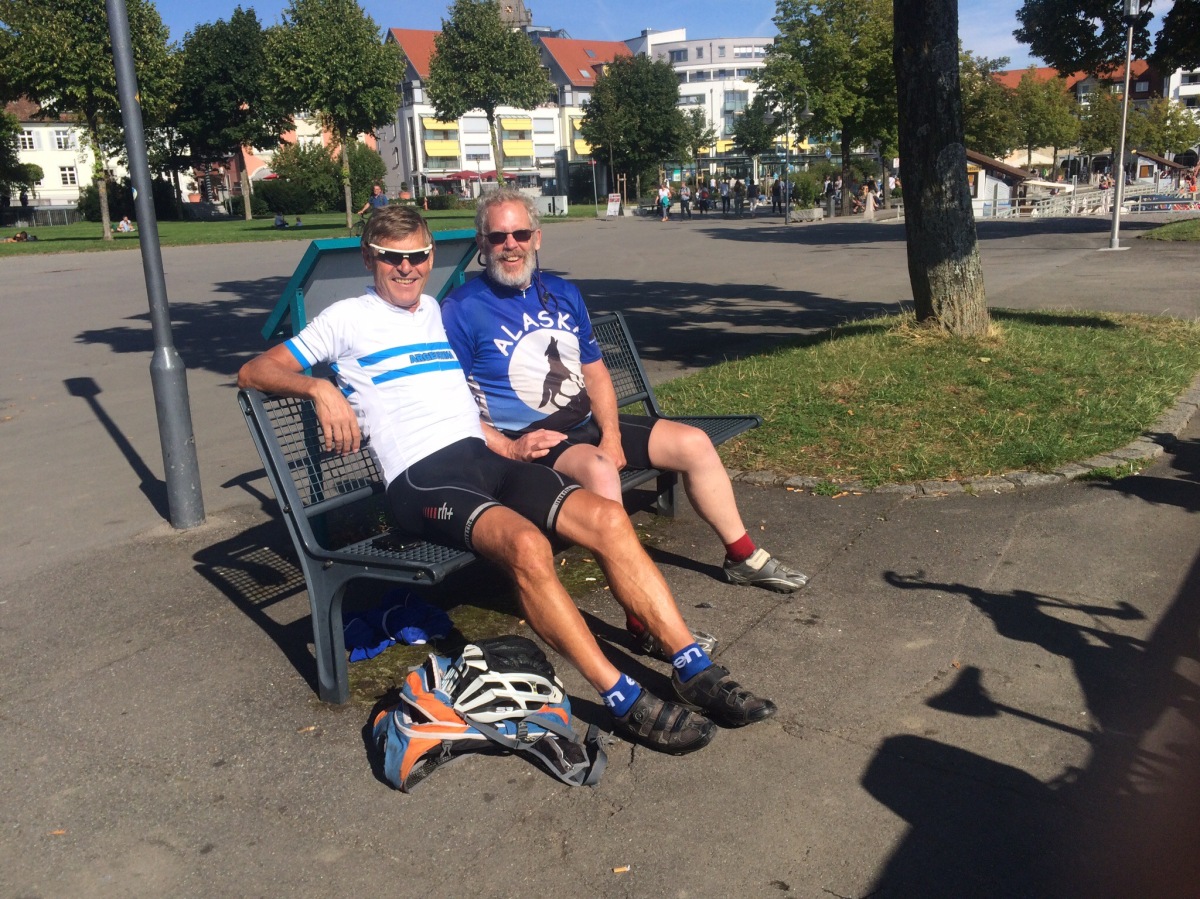 And Jeanne and I were just he two of us. Other than Andermattthis was first time on the trail without someone to guide us and explain the marvels along the way.  We planned to get out of town hoping to find cheaper lodging away from town.  Alas it was not to be.  Every place was booked up with no availability.  At first we passed by the obviously more fancy places but then began to check them too.  It is a delightful lake and beach area, and the Eurobike conference is curing in Freidrichshafen this week. It is the largest bike conference in Europe and we are told every room is booked for 20-30 kilometers. We were beginning to think we might end up wrapping up in what clothes we have along the beach.  But a hotel across  the bike trail had one rom left, but 125 euro per person.  Not the most expensive place I or we have stayed but when we opened the door – wow.  And dinner and breakfast included.  Thus we sat on balcony overlooking the Bodensee and sunset.  A wondrous 5 course meal of salads, fish lamb, desert and finished with another sit on the balcony watching the moon over the lake. 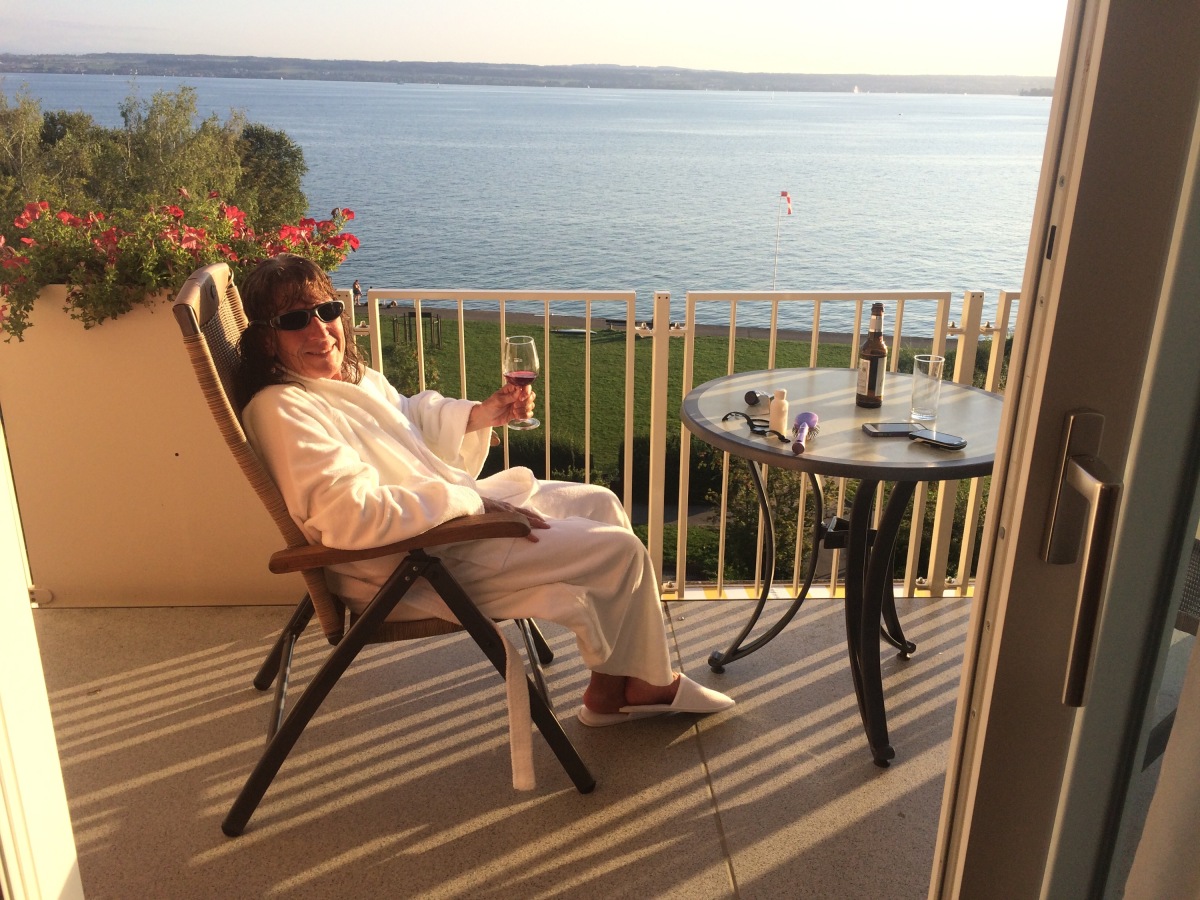