Slept great at hotel but awoke about 3 am with difficulty breathing. Not difficulty but just seemed I could not get a full breath. Realized altitude was affecting me, even after nearly 4 weeks. Talked with others at breakfast and all seemed to have similar experiences. No matter if acclimated there is still a shortage of oxygen here.

So got on bike at 8 am and proceeded to climb 800 meter climb over 13 kilometer. What a way to start the day. But the day proved great. As one said every once in a while the ride of the day is great. Up the hill, the across the big hills at 4185 meters and a descent down the other side of the peninsula through the eucalyptus trees. Beautiful lunch spot over looking town where we caught the 15 minute ferry ride. Vessel was a wooden thing carried a bus and about 20 bicyclists. Push off and land via poling, then a 35 hp motor pushed the we meter long boat. No charge to board but 5 BOB (about $.85) to get off. Then another climb and descent. Road great with smooth pavement and few cars, none aggressive. Beautiful riding, a bit chilly to start but ended warm after 68 kilometer along shores of Lake Titicaca. Inca Utamaro Hotel & Spa. Rooms not ready but bike dreams had soup and birthday cake for Bridgit outside while we waited. Then, less than an hour after eating I could not help it and went swimming. Not coming this far and not swim in Lake Titicaca. Very nice although only went about 50 meters, temperature not bad low 20’s maybe, although every one else said way to cold. I thought great, but immediately after did take a hot shower to clean off.

Several folks rather sick and took truck today. Explosive diarrhea. Ugh. Hoping I can avoid, but eventually probably will be hit.

And after a week feel like I am am beginning to integrate. Folks learn me and I learn them. 35 people who have been through hard times is a hard group to join, but it is happening. Feels good. Each of them said even at the beginning they had a week or two to coalesce as a group. Some very fascinating people.

A and new tidbit about the Incas. Apparently at the what is here the winter Soltice In mid June, they would look to the stars in search of a 15 star cluster known now as the Pleiades. If it was clear the following planting season was to be good. If the cluster was not really clear they held back planting a bit, recently an American scientist looked at this and the events correlated with El Niño years. In other words they could predict El Niño 500 years ago and change crops accordingly.

Beautiful hotel here at side of southern end of lake, the Cordillera Real is visible with its big snow covered peaks, which six are over 6000 meters in height. Once again I am discovering the Andes are big. A fisherman was out on his reed boat this evening. A nice afternoon. And not the least bit frustrating as I did not even try to find wifi and internet. Hence no crashes and timeouts and such. Technology, maybe best to enjoy the moment,,

Writing this as a continuum as seems appropriate, but more important as internet wifi allows. Everywhere advertises wifi restaurants hotels etc but when more than two people log on system crashes and none. Yesterday I just wrote the blog and did not even try to post. Felt good to not be frustrated.

But today the 26 of September stage 44 to LaPaz. Diarrhea twice last night and seriously considering going in truck but felt ok this morn although hotel did have eggs for breakfast which I could not resist. Resisted other usual, fruit salad, jam, etc. figured 84 kilometer day and only 225 vertical. One of the easiest days one would figure. Wrong. Started out ok although I was not pushing only doing about 20 k/h back of pack. For 20 k we rounded the last southern bit of lake Titicaca and waved goodby to this huge lake. Then just gradual uphill climbing from 3825 to eventually 4100 on outskirts of LaPaz.

I was slow and ended up by myself. The daily map made no sense to me and gps would say turn right then would say off course. Basically ended up lost, even going through a pedestrian market which was quite chaotic with the bike. On a street which GPS said was arrival destination, but no bike dreams. Finally Carmen and Julie came out of a hotel after checking in there, one we are at did not meet there standards I guess.

Was the hardest ride of the trip yet for me. Numbers wise it should have been easiest. Again on the fourth floor huff puff huff puff up the stairs. Why am I always on the fourth floor. Last nite there was an elevator supposedly highest in the world, also the slowest and creakiest. Arrived at hotel I was going to take a shower but only Luke warm so just went to bed. So the diesel fumes remain.

The day was full of diesel fumes, traffic, potholes and was as advertised. On the morning briefing we were told to be careful coming into LaPaz as it has a steep descent into the city center where we are. Informed of potholes curbs, cars manholes without covers and they were all there. Plus trying to navigate.

LaPaz is a metropolitan city of 2 1/2 million mostly which nestled into this steep valley. From above it looked pretty, but once in its clutches another crowded city.

Just went out and found a vendor for crackers and some yogurt. See if that will stay in my system, rather than just pass right through.

And again as soon as we showed up the wifi internet system crashed. On way for crackers found a Internet cafe and will try and post this. Unsure about pictures, that may be too much. 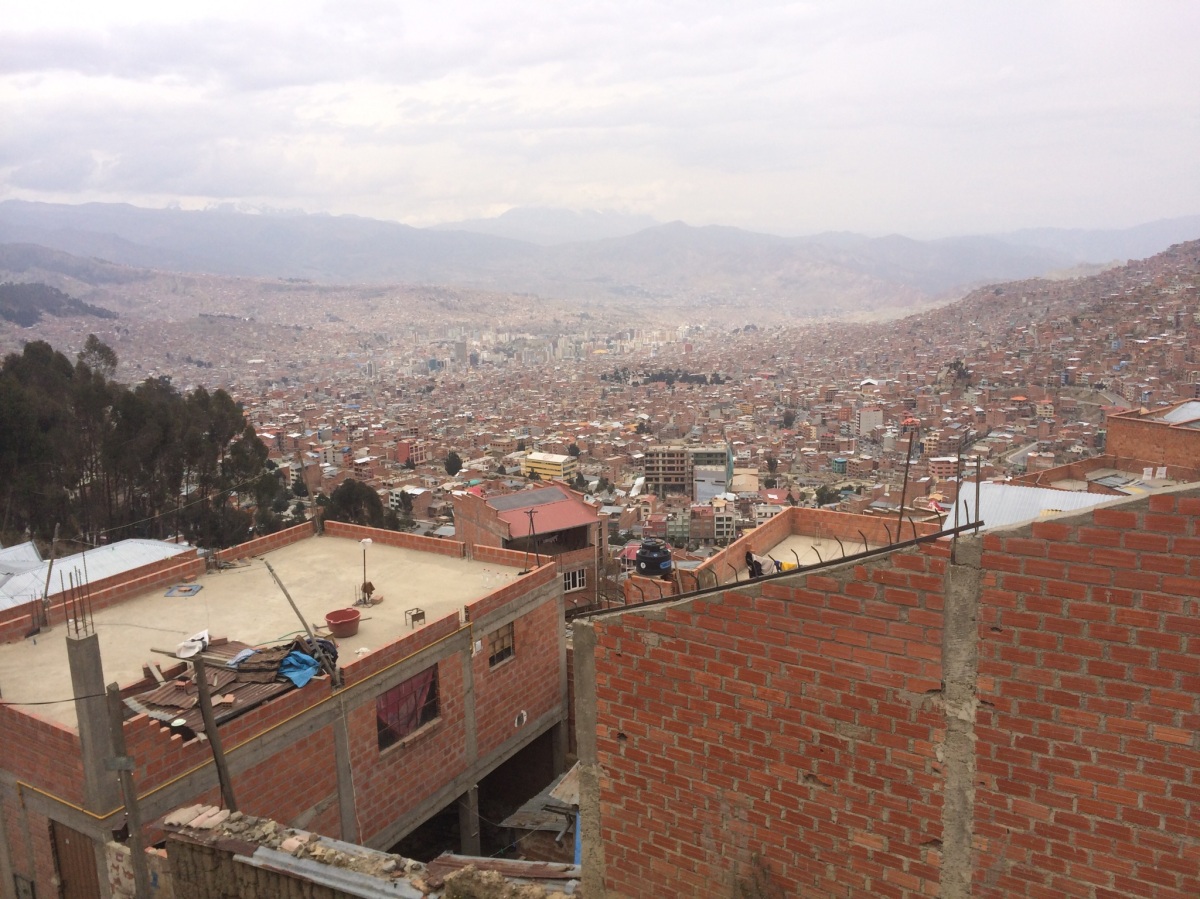 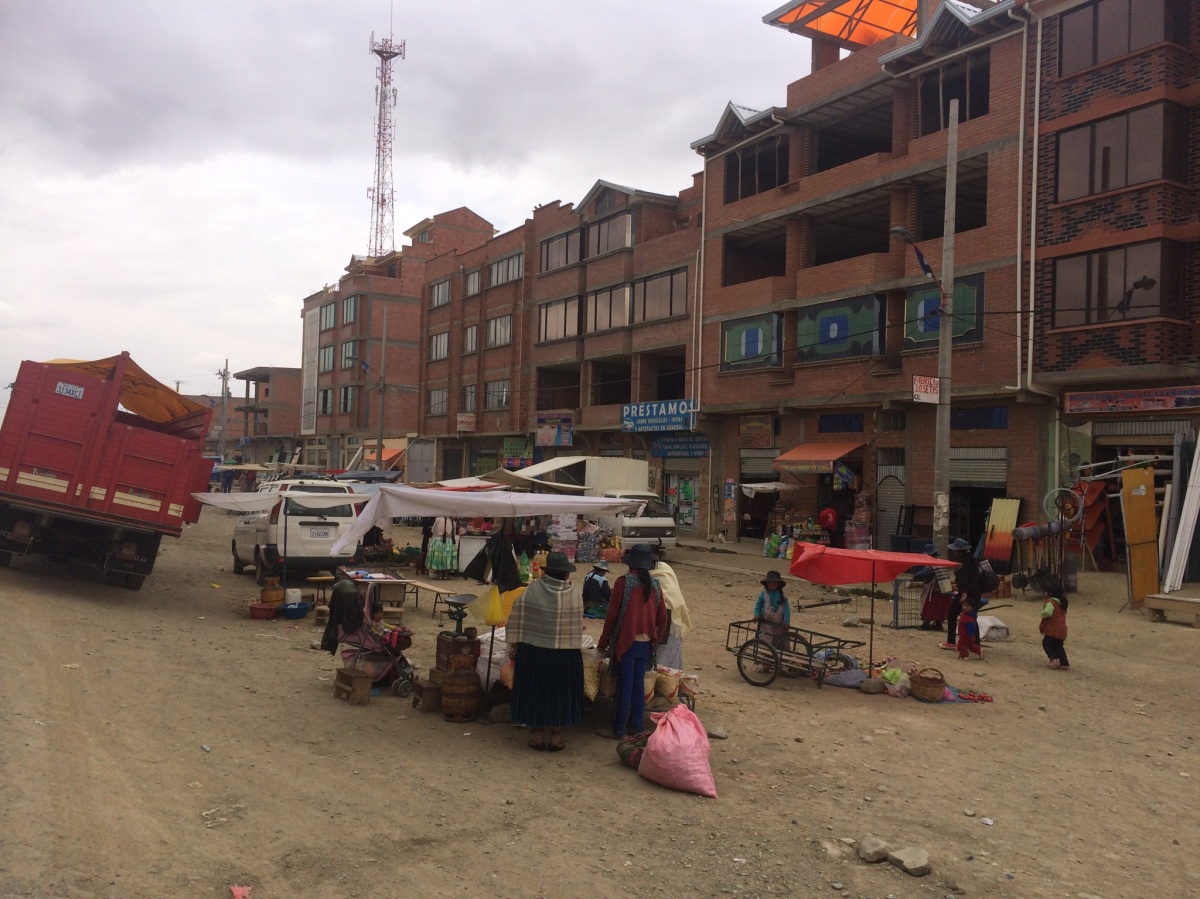